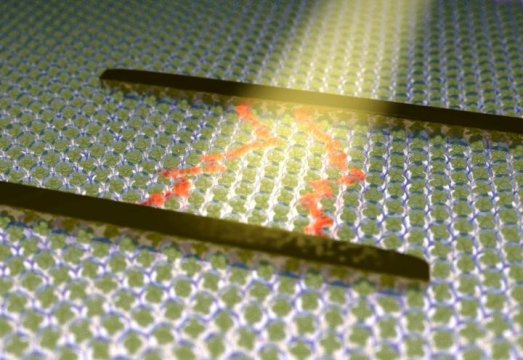 Tiny nanoclusters of metal atoms — such as gold and silver — have properties which mean they can be used as semiconductors, a joint Swansea-Hamburg research team has discovered.

The finding opens the door to a wide range of potential new applications, from phone displays and flatter screens to wearable technology.

Semiconductors are at the heart of modern electronics. Amongst their many uses are in display devices for mobile phones and televisions, light detectors, and solar cells for providing energy.

The two main types of particle-based semiconductors already in use are colloidal quantum dots and organic semiconductors. These materials are at the nanoscale. Their tiny size means they are subject to a phenomenon known as quantum confinement, which causes changes to their optical and electronic properties. These changes make them suitable for their intended applications.

Metal nanoclusters combine aspects of both these other materials. Like colloidal quantum dots, they are very stable. Like organic semiconductors, they are atomically precise, or molecular, containing a specific number of atoms in their metallic core.

However, despite containing all the right ingredients, metal nanoclusters had never before been shown to display semiconducting properties.

This is where the Swansea-Hamburg team made the breakthrough.

The team devised a way of making films of nanoclusters consisting of 25 gold atoms (Au25). They then observed that the nanoclusters displayed semiconducting properties. Specifically, they observed field effect and photoconductivity in phototransistors made of these films. These unique properties are hallmarks of all semiconducting materials.

The team is made up of researchers from Swansea University’s chemistry department and the University of Hamburg in Germany.

“The discovery of semiconducting properties in metal nanoclusters could pave the way for a variety of new applications, from field effect transistors and photodetectors to light emitting diodes and solar cells.

These devices could be manufactured on flexible bases. Many metal nanoclusters, including the ones we investigated in this report, have almost infinite stability, which could make them suitable for ink-jet printing applications.

We need to build on this finding and refine the technique further. But this discovery points the way ahead. It shows that we can use metal nanoclusters to produce high quality semiconducting films that are easy to assemble.”

Other researchers from the team explained other potential applications:

Dr. Andrés Black of the University of Hamburg said:

Michael Galchenko, also of the University of Hamburg said:

“The integration with other low dimensional materials could yield heterostructures with new and interesting functionalities.”

“Semiconductors are a big focus for our work here at Swansea, both in our chemistry department and our Centre for NanoHealth. Christian’s work is very exciting for next generation semiconductor materials — an area in which Swansea University is leading activity, with our industry partners.

These findings, made possible by our close links with Hamburg, are a significant step forward in the field. It shows that for research, as for teaching, our chemistry department is at the forefront.”