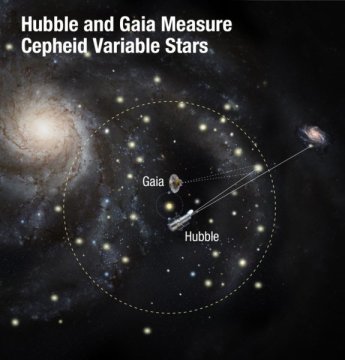 Using the power and synergy of two space telescopes, astronomers have made the most precise measurement to date of the universe’s expansion rate.

The results further fuel the mismatch between measurements for the expansion rate of the nearby universe, and those of the distant, primeval universe — before stars and galaxies even existed.

This so-called “tension” implies that there could be new physics underlying the foundations of the universe. Possibilities include the interaction strength of dark matter, dark energy being even more exotic than previously thought, or an unknown new particle in the tapestry of space.

Combining observations from NASA’s Hubble Space Telescope and the European Space Agency’s (ESA) Gaia space observatory, astronomers further refined the previous value for the Hubble constant, the rate at which the universe is expanding from the big bang 13.8 billion years ago.

Planck mapped the primeval universe as it appeared only 360,000 years after the big bang. The entire sky is imprinted with the signature of the big bang encoded in microwaves. Planck measured the sizes of the ripples in this Cosmic Microwave Background (CMB) that were produced by slight irregularities in the big bang fireball. The fine details of these ripples encode how much dark matter and normal matter there is, the trajectory of the universe at that time, and other cosmological parameters.

These measurements, still being assessed, allow scientists to predict how the early universe would likely have evolved into the expansion rate we can measure today. However, those predictions don’t seem to match the new measurements of our nearby contemporary universe.

“With the addition of this new Gaia and Hubble Space Telescope data, we now have a serious tension with the Cosmic Microwave Background data,” said Planck team member and lead analyst George Efstathiou of the Kavli Institute for Cosmology in Cambridge, England, who was not involved with the new work.

“The tension seems to have grown into a full-blown incompatibility between our views of the early and late time universe,” said team leader and Nobel Laureate Adam Riess of the Space Telescope Science Institute and the Johns Hopkins University in Baltimore, Maryland. “At this point, clearly it’s not simply some gross error in any one measurement. It’s as though you predicted how tall a child would become from a growth chart and then found the adult he or she became greatly exceeded the prediction. We are very perplexed.”

In 2005, Riess and members of the SHOES (Supernova H0 for the Equation of State) team set out to measure the universe’s expansion rate with unprecedented accuracy. In the following years, by refining their techniques, this team shaved down the rate measurement’s uncertainty to unprecedented levels. Now, with the power of Hubble and Gaia combined, they have reduced that uncertainty to just 2.2 percent.

Because the Hubble constant is needed to estimate the age of the universe, the long-sought answer is one of the most important numbers in cosmology. It is named after astronomer Edwin Hubble, who nearly a century ago discovered that the universe was uniformly expanding in all directions — a finding that gave birth to modern cosmology.

Galaxies appear to recede from Earth proportional to their distances, meaning that the farther away they are, the faster they appear to be moving away. This is a consequence of expanding space, and not a value of true space velocity. By measuring the value of the Hubble constant over time, astronomers can construct a picture of our cosmic evolution, infer the make-up of the universe, and uncover clues concerning its ultimate fate.

The two major methods of measuring this number give incompatible results. One method is direct, building a cosmic “distance ladder” from measurements of stars in our local universe. The other method uses the CMB to measure the trajectory of the universe shortly after the big bang and then uses physics to describe the universe and extrapolate to the present expansion rate. Together, the measurements should provide an end-to-end test of our basic understanding of the so-called “Standard Model” of the universe. However, the pieces don’t fit.

Using Hubble and newly released data from Gaia, Riess’ team measured the present rate of expansion to be 73.5 kilometers (45.6 miles) per second per megaparsec. This means that for every 3.3 million light-years farther away a galaxy is from us, it appears to be moving 73.5 kilometers per second faster. However, the Planck results predict the universe should be expanding today at only 67.0 kilometers (41.6 miles) per second per megaparsec. As the teams’ measurements have become more and more precise, the chasm between them has continued to widen, and is now about four times the size of their combined uncertainty.

Over the years, Riess’ team has refined the Hubble constant value by streamlining and strengthening the “cosmic distance ladder,” used to measure precise distances to nearby and far-off galaxies. They compared those distances with the expansion of space, measured by the stretching of light from nearby galaxies. Using the apparent outward velocity at each distance, they then calculated the Hubble constant.

Gaia further refined this yardstick by geometrically measuring the distance to 50 Cepheid variables in the Milky Way. These measurements were combined with precise measurements of their brightnesses from Hubble. This allowed the astronomers to more accurately calibrate the Cepheids and then use those seen outside the Milky Way as milepost markers.

“When you use Cepheids, you need both distance and brightness,” explained Riess. Hubble provided the information on brightness, and Gaia provided the parallax information needed to accurately determine the distances. Parallax is the apparent change in an object’s position due to a shift in the observer’s point of view. Ancient Greeks first used this technique to measure the distance from Earth to the Moon.

“Hubble is really amazing as a general-purpose observatory, but Gaia is the new gold standard for calibrating distance. It is purpose-built for measuring parallax — this is what it was designed to do,” Stefano Casertano of the Space Telescope Science Institute and a member of the SHOES team added. “Gaia brings a new ability to recalibrate all past distance measures, and it seems to confirm our previous work. We get the same answer for the Hubble constant if we replace all previous calibrations of the distance ladder with just the Gaia parallaxes. It’s a crosscheck between two very powerful and precise observatories.”

The goal of Riess’ team is to work with Gaia to cross the threshold of refining the Hubble constant to a value of only one percent by the early 2020s. Meanwhile, astrophysicists will likely continue to grapple with revisiting their ideas about the physics of the early universe.

The Riess team’s latest results are published in the July 12 issue of the Astrophysical Journal.