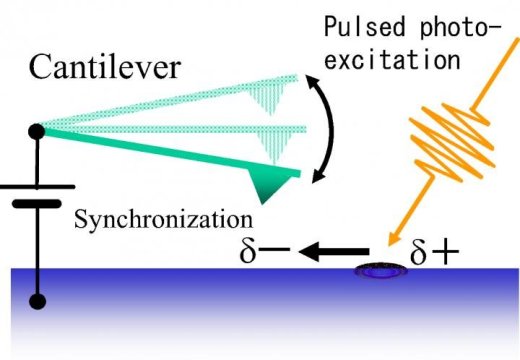 A research team at Osaka University has developed an improved method for producing microscope images that can spot speedy electrons zipping through nanomaterials used in solar panels. By applying laser light to the device at just the right times, this group achieved nanosecond time resolution for the first time while maintaining the magnification. This work could improve the quality of photovoltaic materials for devices such as solar panels by helping to identify and eliminate inefficiencies during the manufacturing process.

Surveillance cameras are ubiquitous, and extremely valuable to the police when trying to catch thieves. However, cameras that record only a single movie frame per minute would be useless for apprehending speedy robbers who can make their getaway in less than sixty seconds. Solar panels harness the power of the sun when electrons become excited to a higher energy level, leaving a void, or “hole,” behind. However, if an electron recombines with a hole before reaching the electrode, the harvested energy is lost, “robbing” the device of critical efficiency.

Currently available microscopy methods are too slow to catch the miscreants in the act. So the team at Osaka used electrostatic force microscopy (EFM), in which a tiny, vibrating cantilever tip is made sensitive to electric charges passing beneath it. EFM is still usually too slow to watch electrons and holes in motion, but their key innovation was to apply synchronized laser pulses that hit the sample at the same point of the cantilever’s oscillation. By altering the delay time between the start of the cycle and the laser pulse, they were able to create a movie with frames as fast as 300 nanoseconds. “This is the first time anyone was able to combine nanosecond time resolution without sacrificing magnification,” said lead author Kento Araki.

When the researchers probed the “scene of the crime,” they were able to obtain video evidence of recombination as it was occurring. This method may be extremely useful for designing more efficient solar panels by reducing the energy losses due to recombination. According to senior author Takuya Matsumoto, “the research is also potentially useful for the study of catalysts or batteries that depend on light activation.”