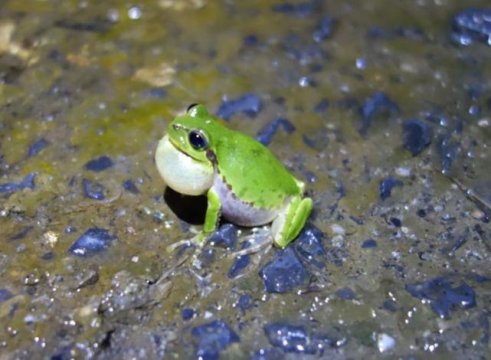 If you’ve ever camped by a pond, you know frogs make a racket at night; but what you might not know is how functional and regulated their choruses really are. Frogs communicate with sound, and amid their ruckus is an internally orchestrated system that lets information get through more clearly while also permitting collective choruses and time to rest. Researchers from Osaka University and University of Tsukuba sought to leverage this amphibious acumen for mathematical and technological aims.

The team looked at the calling patterns of male Japanese tree frogs over different time intervals. To do so, they placed three frogs in individual inside cages and recorded their vocal interplay. They found the frogs both avoided overlapping croaks and collectively switched between calling and silence. The researchers then created a mathematical model to adapt the frogs’ acoustic teachings for technological benefit, as such patterns are similar to those valued in networks. The findings are reported in the journal Royal Society Open Science.

“We found neighboring frogs avoided temporal overlap, which allows a clear path for individual voices to be heard,” study co-author Daichi Kominami explains. “In this same way, neighboring nodes in a sensor network need to alternate the timings of data transmission so the data packets don’t collide.”

In the observed frog trios, there were also times of alternating between collective silences and choruses. The overlap avoidance was consistent (deterministic), while the latter collective calls were more varied (stochastic). A further utility in the pattern was how it smartly allows the frogs rest breaks from their calling, which demands a great deal of energy.

The researchers then developed a mathematical model incorporating the frogs’ main interaction patterns and adapting them to a phase-based format usable for technological means.

“We modeled the calling and silent states in a deterministic way,” according to lead author Ikkyu Aihara, “while modeled the transitions to and from them in a stochastic way. Those models qualitatively reproduced the calling pattern of actual frogs and were then helpful in designing autonomous distributed communication systems.”

Such systems must cleverly regulate give and take, activity and rest. Therefore, as the third part of the study, the researchers leveraged the model for data traffic management in a wireless sensor network. These networks are a key component in the Internet of things, as their dispersed sensor nodes measure and communicate different environmental characteristics. Then, through complex coordination, collected data are fed to a central system.

They found the short-time-scale alternation was especially effective at averting data packet collisions. Meanwhile, the cyclic and collective transitions in the long time scale offered promise for regulating energy consumption.

“There is a dual benefit to this study,” co-author Masayuki Murata says. “It will lead both to greater biological knowledge in understanding frog choruses, and to greater technological efficiency in wireless sensor networks.”