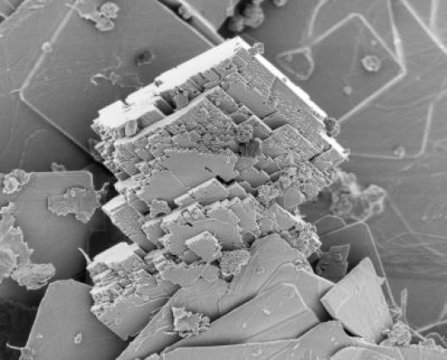 Scientists have found a rapid way of producing magnesite, a mineral which stores carbon dioxide. If this can be developed to an industrial scale, it opens the door to removing CO2 from the atmosphere for long-term storage, thus countering the global warming effect of atmospheric CO2. This work is presented at the Goldschmidt conference in Boston.

Scientists are already working to slow global warming by removing carbon dioxide from the atmosphere, but there are serious practical and economic limits on developing the technology. Now, for the first time, researchers have explained how magnesite forms at low temperature, and offered a route to dramatically accelerating its crystallization. A tonne of naturally-occurring magnesite can remove around half a tonne of CO2 from the atmosphere, but the rate of formation is very slow.

Project leader, Professor Ian Power (Trent University, Ontario, Canada) said: “Our work shows two things. Firstly, we have explained how and how fast magnesite forms naturally. This is a process which takes hundreds to thousands of years in nature at Earth’s surface. The second thing we have done is to demonstrate a pathway which speeds this process up dramatically.”

The researchers were able to show that by using polystyrene microspheres as a catalyst, magnesite would form within 72 days. The microspheres themselves are unchanged by the production process, so they can ideally be reused.

“Using microspheres means that we were able to speed up magnesite formation by orders of magnitude. This process takes place at room temperature, meaning that magnesite production is extremely energy efficient.”

“For now, we recognise that this is an experimental process, and will need to be scaled up before we can be sure that magnesite can be used in carbon sequestration (taking CO2 from the atmosphere and permanently storing it as magnesite). This depends on several variables, including the price of carbon and the refinement of the sequestration technology, but we now know that the science makes it do-able.”

Commenting, Professor Peter Kelemen at Columbia University’s Lamont Doherty Earth Observatory (New York) said: “It is really exciting that this group has worked out the mechanism of natural magnesite crystallization at low temperatures, as has been previously observed — but not explained — in weathering of ultramafic* rocks. The potential for accelerating the process is also important, potentially offering a benign and relatively inexpensive route to carbon storage, and perhaps even direct CO2 removal from air.”

Professor Keleman was not involved in this work, this is an independent comment.

*Ultramafic rocks are rich in magnesium, with low silica content. Commercially, magnesite (MgCO3, magnesium carbonate) is used in the production of magnesium oxide mainly for the steel industry. It is also used as an inexpensive gemstone.

This research was funded by the Natural Sciences and Engineering Research Council of Canada (NSERC).