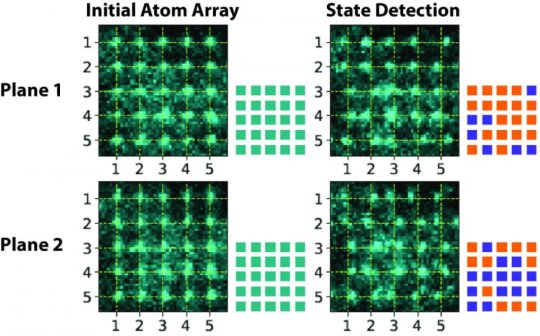 A new method allows the quantum state of atomic “qubits” — the basic unit of information in quantum computers — to be measured with twenty times less error than was previously possible, without losing any atoms. Accurately measuring qubit states, which are analogous to the one or zero states of bits in traditional computing, is a vital step in the development of quantum computers. A paper describing the method by researchers at Penn State appears March 25, 2019 in the journal Nature Physics.

“We are working to develop a quantum computer that uses a three-dimensional array of laser-cooled and trapped cesium atoms as qubits,” said David Weiss, professor of physics at Penn State and the leader of the research team. “Because of how quantum mechanics works, the atomic qubits can exist in a ‘superposition’ of two states, which means they can be, in a sense, in both states simultaneously. To read out the result of a quantum computation, it is necessary to perform a measurement on each atom. Each measurement finds each atom in only one of its two possible states. The relative probability of the two results depends on the superposition state before the measurement.”

To measure qubit states, the team first uses lasers to cool and trap about 160 atoms in a three-dimensional lattice with X, Y, and Z axes. Initially, the lasers trap all of the atoms identically, regardless of their quantum state. The researchers then rotate the polarization of one of the laser beams that creates the X lattice, which spatially shifts atoms in one qubit state to the left and atoms in the other qubit state to the right. If an atom starts in a superposition of the two qubit states, it ends up in a superposition of having moved to the left and having moved to the right. They then switch to an X lattice with a smaller lattice spacing, which tightly traps the atoms in their new superposition of shifted positions. When light is then scattered from each atom to observe where it is, each atom is either found shifted left or shifted right, with a probability that depends on its initial state. The measurement of each atom’s position is equivalent to a measurement of each atom’s initial qubit state.

“Mapping internal states onto spatial locations goes a long way towards making this an ideal measurement,” said Weiss. “Another advantage of our approach is that the measurements do not cause the loss of any of the atoms we are measuring, which is a limiting factor in many previous methods.”

The team determined the accuracy of their new method by loading their lattices with atoms in either one or the other qubit states and performing the measurement. They were able to accurately measure atom states with a fidelity of 0.9994, meaning that there were only six errors in 10,000 measurements, a twenty-fold improvement on previous methods. Additionally, the error rate was not impacted by the number of qubits that the team measured in each experiment and because there was no loss of atoms, the atoms could be reused in a quantum computer to perform the next calculation.

“Our method is similar to the Stern-Gerlach experiment from 1922 — an experiment that is integral to the history of quantum physics,” said Weiss. “In the experiment, a beam of silver atoms was passed through a magnetic field gradient with their north poles aligned perpendicular to the gradient. When Stern and Gerlach saw half the atoms deflect up and half down, it confirmed the idea of quantum superposition, one of the defining aspects of quantum mechanics. In our experiment, we also map the internal quantum states of atoms onto positions, but we can do it on an atom by atom basis. Of course, we do not need to test this aspect of quantum mechanics, we can just use it.”

In addition to Weiss, the research team at Penn State includes Tsung-Yao Wu, Aishwarya Kumar, and Felipe Giraldo. The research was supported by the U.S. National Science Foundation.