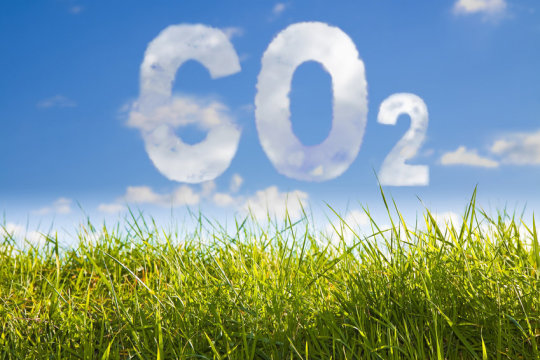 Limiting global warming to 2 degrees Celsius will require not only reducing emissions of carbon dioxide, but also active removal of carbon dioxide from the atmosphere. This conclusion from the Intergovernmental Panel on Climate Change has prompted heightened interest in “negative emissions technologies.”

A new study published June 25 in Nature Climate Change evaluates the potential for recently described methods that capture carbon dioxide from the atmosphere through an “electrogeochemical” process that also generates hydrogen gas for use as fuel and creates by-products that can help counteract ocean acidification.

The process uses electricity from a renewable energy source for electrolysis of saline water to generate hydrogen and oxygen, coupled with reactions involving globally abundant minerals to produce a solution that strongly absorbs and retains carbon dioxide from the atmosphere. Rau and other researchers have developed several related methods, all of which involve electrochemistry, saline water, and carbonate or silicate minerals.

“It not only reduces atmospheric carbon dioxide, it also adds alkalinity to the ocean, so it’s a two-pronged benefit,” Rau said. “The process simply converts carbon dioxide into a dissolved mineral bicarbonate, which is already abundant in the ocean and helps counter acidification.”

The negative emissions approach that has received the most attention so far is known as “biomass energy plus carbon capture and storage” (BECCS). This involves growing trees or other bioenergy crops (which absorb carbon dioxide as they grow), burning the biomass as fuel for power plants, capturing the emissions, and burying the concentrated carbon dioxide underground.

“BECCS is expensive and energetically costly. We think this electrochemical process of hydrogen generation provides a more efficient and higher capacity way of generating energy with negative emissions,” Rau said.

He and his coauthors estimated that electrogeochemical methods could, on average, increase energy generation and carbon removal by more than 50 times relative to BECCS, at equivalent or lower cost. He acknowledged that BECCS is farther along in terms of implementation, with some biomass energy plants already in operation. Also, BECCS produces electricity rather than less widely used hydrogen.

“The issues are how to supply enough biomass and the cost and risk associated with putting concentrated carbon dioxide in the ground and hoping it stays there,” Rau said.

The electrogeochemical methods have been demonstrated in the laboratory, but more research is needed to scale them up. The technology would probably be limited to sites on the coast or offshore with access to saltwater, abundant renewable energy, and minerals. Coauthor Heather Willauer at the U.S. Naval Research Laboratory leads the most advanced project of this type, an electrolytic-cation exchange module designed to produce hydrogen and remove carbon dioxide through electrolysis of seawater. Instead of then combining the carbon dioxide and hydrogen to make hydrocarbon fuels (the Navy’s primary interest), the process could be modified to transform and store the carbon dioxide as ocean bicarbonate, thus achieving negative emissions.

“It’s early days in negative emissions technology, and we need to keep an open mind about what options might emerge,” Rau said. “We also need policies that will foster the emergence of these technologies.”