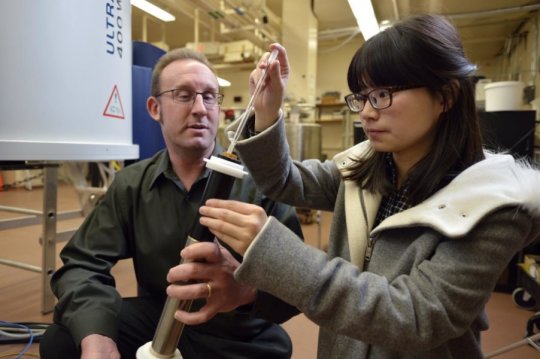 Researchers in the College of Science and College of Engineering have discovered that a high-strength polymer called “PBDT” has a rare double helix structure, opening possibilities for use in a variety of applications.

This discovery, recently published in Nature Communications, comes as an extension of the development of a polymer ion-gel, which promises to outperform conventional flammable liquid battery electrolytes. Now, equipped with evidence of the double helix structure, the potential for this high-performance material extends well beyond batteries.

“This polymer has been around for 30 years, and no one had figured out that it’s a double helix,” said Associate Professor of Chemistry Lou Madsen, who led this research. “Double helices in synthetic systems are essentially unheard of.”

Madsen led an international collaboration, which included Virginia Tech professors Rui Qiao (mechanical engineering) and Robert Moore (chemistry), as well as Theo Dingemans at the University of North Carolina at Chapel Hill and Bernd Ensing at the University of Amsterdam in the Netherlands. All three Virginia Tech professors are affiliated with the Macromolecules Innovation Institute.

Composites are engineering materials that bond multiple components to create a new set of improved properties.

Tires and modern plane fuselages are examples of composites. They require a core material, such as rubber in the tires example, to be mixed with other materials, such as reinforcing fiber fillers, for added strength.

Madsen and his team had already shown in 2016 that PBDT could mix with liquid ions to create a solid battery electrolyte.

“Before we were confident about this double helix, we discovered PBDT could mix with liquid ions and make this electrolyte that has very good conductivity and is also mechanically stiff,” Madsen said. “We made something with PBDT, but we wanted to know why it works so well. We had evidence it was a double helix but hadn’t appreciated most of its features.”

Double helix structures, such as DNA, are well known in nature, and they have high bending stiffness. DNA has a diameter of about 2.5 nanometers and is rigid up to about 50 nanometers in length, where it begins to bend. That creates a “rigidity ratio” of about 20 to 1, similar to a carrot stick.

In comparison, PBDT has a rigidity ratio of 1,000 to 1, making it one of the stiffest molecules yet discovered.

The polymer’s supreme rigidity means that only a fraction of it would be needed to achieve comparable performance to conventional reinforcing fillers. Furthermore, the process for creating it is extremely cheap and easy.

“If you’re using conventional fillers in a composite, you might use 10 percent to get the properties you want,” Madsen said. “But PBDT has this long stiffness length and a tiny diameter. This means you might only have to put in 1 or 2 percent to get a material that’s highly enhanced.”

From X-rays and DNA to computational modeling

Back in 2014, Madsen and his Ph.D. student Ying Wang had thought the polymer was a double helix but didn’t have sturdy evidence. They then began X-ray studies on PBDT, similar to the studies that Rosalind Franklin conducted on DNA in the early 1950s that led to the discovery of the DNA double helix. Sure enough, the PBDT X-ray was similar to Franklin’s DNA X-ray. They further used a technique similar to MRI to bolster their evidence.

Madsen then turned to Ensing in Holland and then to Qiao at Virginia Tech for help in understanding the polymer with computational models.

Qiao said he initially didn’t think the simulation would even work.

“A simulation of a self-assembly to form a double helical structure — I had never heard of it except people had done it for DNA,” Qiao said. “But for this kind of simulation, it’s very difficult. My student tried anyway and miraculously it worked. We tried a bunch of different conditions, different ways of running simulations, but the results were robust, which gave us some confidence that it is a real double helix.”

The confirmation of the double helix structure opens up possibilities for PBDT’s potential application beyond battery electrolytes, such as lightweight aerospace materials.

“The application of this is really going to be limited by our imagination,” Qiao said. “Now we have a new kind of Lego piece. As more people hear about this material, they will come up with their own way of using it. What will really come out of it, we may not envision today.”