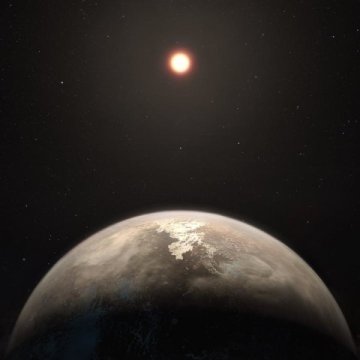 Last autumn, the world was excited by the discovery of an exoplanet called Ross 128 b, which is just 11 light years away from Earth. New work from a team led by Diogo Souto of Brazil’s Observatório Nacional and including Carnegie’s Johanna Teske has for the first time determined detailed chemical abundances of the planet’s host star, Ross 128.

Understanding which elements are present in a star in what abundances can help researchers estimate the makeup of the exoplanets that orbit them, which can help predict how similar the planets are to the Earth.

“Until recently, it was difficult to obtain detailed chemical abundances for this kind of star,” said lead author Souto, who developed a technique to make these measurements last year.

Like the exoplanet’s host star Ross 128, about 70 percent of all stars in the Milky Way are red dwarfs, which are much cooler and smaller than our Sun. Based on the results from large planet-search surveys, astronomers estimate that many of these red dwarf stars host at least one exoplanet. Several planetary systems around red dwarfs have been newsmakers in recent years, including Proxima b, a planet which orbits the nearest star to our own Sun, Proxima Centauri, and the seven planets of TRAPPIST-1, which itself is not much larger in size than our Solar System’s Jupiter.

“The ability of APOGEE to measure near-infrared light, where Ross 128 is brightest, was key for this study,” Teske said. “It allowed us to address some fundamental questions about Ross 128 b’s `Earth-like-ness’,” Teske said.

When stars are young, they are surrounded by a disk of rotating gas and dust from which rocky planets accrete. The star’s chemistry can influence the contents of the disk, as well as the resulting planet’s mineralogy and interior structure. For example, the amount of magnesium, iron, and silicon in a planet will control the mass ratio of its internal core and mantle layers.

The team determined that Ross 128 has iron levels similar to our Sun. Although they were not able to measure its abundance of silicon, the ratio of iron to magnesium in the star indicates that the core of its planet, Ross 128 b, should be larger than Earth’s.

Because they knew Ross 128 b’s minimum mass, and stellar abundances, the team was also able to estimate a range for the planet’s radius, which is not possible to measure directly due to the way the planet’s orbit is oriented around the star.

Knowing a planet’s mass and radius is important to understanding what it’s made of, because these two measurements can be used to calculate its bulk density. What’s more, when quantifying planets in this way, astronomers have realized that planets with radii greater than about 1.7 times Earth’s are likely surrounded by a gassy envelope, like Neptune, and those with smaller radii are likely to be more-rocky, as is our own home planet.

The estimated radius of Ross 128 b indicates that it should be rocky.

Lastly, by measuring the temperature of Ross 128 and estimating the radius of the planet the team was able to determine how much of the host star’s light should be reflecting off the surface of Ross 128 b, revealing that our second-closest rocky neighbor likely has a temperate climate.

“It’s exciting what we can learn about another planet by determining what the light from its host star tells us about the system’s chemistry,” Souto said. “Although Ross 128 b is not Earth’s twin, and there is still much we don’t know about its potential geologic activity, we were able to strengthen the argument that it’s a temperate planet that could potentially have liquid water on its surface.”