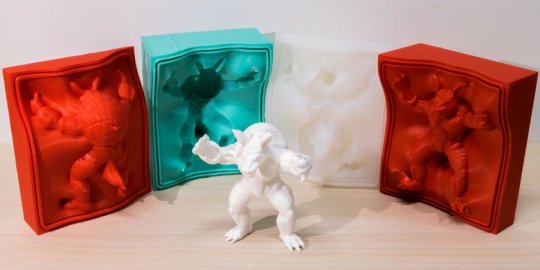 The method of fabricating objects via silicone molding has a long tradition. Until now, however, creating molds for casting complex objects required a lot of experience and still involved manual work, which made the process expensive and slow. Researchers from the Istituto di Scienza e Tecnologie dell’Informazione (ISTI-CNR) and the Institute of Science and Technology Austria (IST Austria) have now developed a tool that not only automatically finds the best way of designing the molds but also delivers templates for so-called “metamolds”: Rigid molds that are 3D-printed and that are used to fabricate the optimized silicone molds. Their method, which can lower the cost of this fabricating technique, is presented at this year’s  SIGGRAPH conference.

When it comes to fabricating a series of identical objects, the technique of molding is playing an important role. One of the favored materials for the mold is silicone, as it is deformable and therefore forgiving when it comes to extracting complex objects from the mold at the end of the fabrication process. Extracting the object from the mold generally requires deciding for a direction in which the mold pieces can be separated without getting caught in overhanging parts of the object. A careful cut needed to be placed to open the mold. This process, which until now involved manual work from an experienced craftsman, has now been automated. “Until now, silicone molding of complex shapes was a craft that needed years of experience and a skillful hand. You needed to know where to place the cuts ideally and the work was done manually. Our new tool makes this method accessible for everyone,” says Bernd Bickel.

The user only needs to upload the desired shape to the computer. The tool then helps in two steps: first, it calculates where the cuts need to be placed for an optimal result. This means that the smallest possible number of mold pieces is used and that the object can be safely removed from the mold once it is finished. Then the computer goes one step further: it automatically creates the 3D-printable templates of the metamold, a container that is used to fabricate the ideal silicone mold pieces. The printed metamolds are filled with liquid silicone to produce the final silicone mold pieces, which are reusable and allow to cast multiple replicas.

The researchers expect that their method will prove very useful for small series, for example in jewelry design or art. “When you are not producing millions of copies, then this is the method of choice,” says Thomas Alderighi from ISTI-CNR, the first author of the study who has spent two months at IST Austria as an intern in the research group of Bernd Bickel.

As noted by Paolo Cignoni, research director at ISTI — CNR, an interesting field of application is the production of a small number of replicas for museums that could be handled by visitors for a deeper experience of the exhibition.

The final silicone mold pieces can then be used to create replicas from a variety of different materials, including traditional ones like various types of resin, but also unconventional ones like chocolate or ice.

Institute of Science and Technology Austria. .