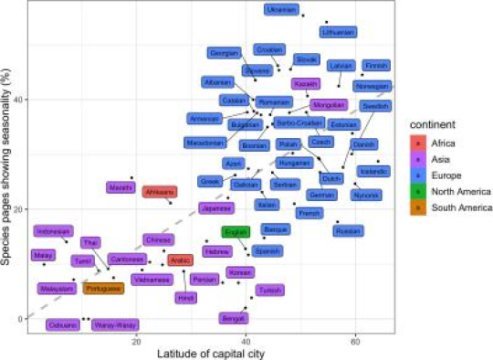 An international team of researchers from Ben-Gurion University of the Negev, the University of Oxford and University of Birmingham have found that internet search patterns and rhythms reflect seasonal interest in plants and animals.

This surprise finding, published in PLoS Biology, suggests new ways to monitor changes in the world’s biodiversity based on monitoring internet searches and may provide a roadmap for conservation around the world.

“This work is part of a growing field of research called ‘conservation culturomics’ which aims to elucidate patterns of human-nature interactions manifested in large digital repositories,” says BGU’s Dr. Uri Roll, a senior lecturer in the Mitrani Department for Desert Ecology at The Jacob Blaustein Institutes for Desert Research.

“It also reveals new techniques to observe interest in nature and may provide effective conservation targets,” says Roll. “We live in an age of disintegrating natural ecosystems and biodiversity collapse. Novel tools and approaches are needed to tackle these gargantuan challenges.”

More than a quarter of the species in their dataset showed seasonal interest. For these seasonal species, the researchers found that the timing and amount of internet activity is a highly accurate measure of when and how the species is present. The team thinks it might be possible to measure changes in the presence and abundance of species simply by measuring internet activity.

In addition to correlating seasonal patterns in online interest with patterns in nature, the researchers also identified instances where seasonal patterns responded to cultural events. In the U.S., English page views for the wild turkey showed repeated annual spikes around Thanksgiving.

Together these patterns suggest that people’s online behavior is a response to phenomena in the natural world.

“People are often becoming increasingly detached from the natural world and as a result we didn’t really expect their activity online to respond to patterns in nature,” adds lead author and University of Oxford doctoral candidate John Mittermeier. “To see that online activity often correlates strongly with natural phenomena seems to suggest that people are paying attention to the world around them. From a conservation perspective, that is really exciting.”

The research team posits that there is a lot of potential to apply these methods to conservation policy and actions, such as selecting flagship species or iconic areas. Being able to identify a seasonal peak in interest in a particular species, for example, could help an organization decide when and how to launch a particular fundraising campaign.