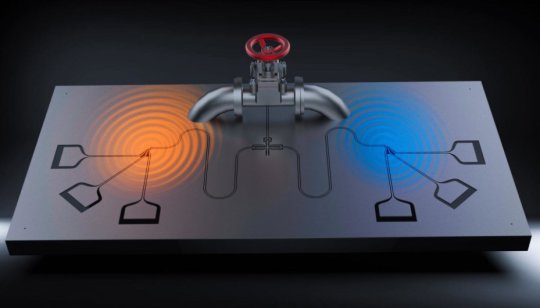 Researchers from Aalto University are designing nano-sized quantum heat engines to explore whether they may be able to outperform classical heat engines in terms of power and efficiency.

In their paper, published in Nature Physics, the group led by Professor Jukka Pekola presents a way to solve a problem in how quantum systems interact and exchange energy with their macroscopic surroundings, and within themselves. The group strives to treat quantum information and thermodynamics on the same footing in their research.

‘We have realised a miniature heat valve in a quantum system composed of an artificial atom, a superconducting qubit — the basic building block of both quantum computing and quantum heat engines,’ explains Professor Pekola.

While in quantum computers the qubit has to be decoupled from the noisy external world to sustain a fragile quantum state, in quantum heat engines, the system needs to be coupled to its dissipative surroundings, to heat baths.

A particularly puzzling problem is the process of thermalisation when connecting external heat sources or ‘thermal baths’ to a coherent quantum system or qubit. Ultimately, heat is exchanged between these systems through the emission of photons, one by one.

‘Using a qubit controlled by a magnetic field as a “valve,” we can either block or release the flow of photons carrying the heat through the qubit between two “heat baths” formed of metallic resistors,’ explains Dr. Alberto Ronzani, the lead author of the paper.

A quantum heat engine transforms heat into useful work or, in reverse, operates as a refrigerator.

‘Our work demonstrates how a heat valve can work in certain cases. We aim to understand, combining experimental and theoretical efforts, how quantum refrigerators and heat engines work, but have yet to come up with a general picture of the cross-over between non-dissipative and fully dissipative systems. That’s a challenge for the future,’ says Pekola.

In addition to Pekola and Ronzani, the team consists of doctoral students Bayan Karimi and Jorden Senior, Dr. Joonas Peltonen and additional collaborators Yu-Cheng Chang and Dr. ChiiDong Chen from the National Taiwan University and the Institute of Physics, Academia Sinica, in Taiwan, Republic of China, with experimental contributions to this work.

Jukka Pekola leads the Quantum Technology Finland — Centre of Excellence funded by the Academy of Finland. The experimental research was carried out at the OtaNano national research infrastructure for micro, nano and quantum technologies in Finland.