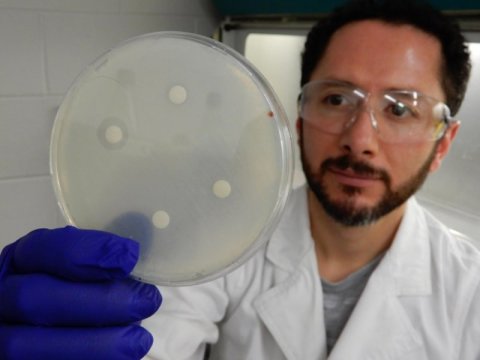 A team of international researchers led by The University of Queensland has discovered that the chemical chlorimuron ethyl also targets a range of fungal infections that are potentially fatal to humans, particularly people undergoing treatments which place the immune system under stress.

Dr Luke Guddat, from UQ’s School of Chemistry and Molecular Biosciences, said the finding was very timely, given the growth in drug-resistant infections.

“There are more drug-resistant fungal diseases than ever — posing a major threat to global human health — and new drugs are urgently required to combat these diseases,” he said.

“Through this research we wanted to see if a specific class of commercial herbicide has the ability to stop the growth of these infections.

“We thought this was a good idea, since plants and fungi have a similar enzyme that these chemicals inhibit, and it turns out we were correct.”

The researchers tested five different families of compounds, to see if they could inhibit a key enzyme from the fungal species, Candida albicans and Cryptococcus neoformans.

One of the five, chlorimurion ethyl, was a stand-out candidate.

“In studies in the petri dish and with mice, it was highly effective at preventing proliferation of growth,” Dr Guddat said.

“By inhibiting this enzyme you’re removing a key metabolic step that makes three types of amino acids, which these infections need to grow.

“And most importantly, humans don’t have this enzyme — we obtain these amino acids from our food — so there’s very little chance that these compounds will be toxic to humans, a factor which limits the use of many of the other currently prescribed antifungal drugs.”

Dr Guddat said while there’s a bright future for the development of compounds to treat this type of infection, more research is necessary.

“We’re only at the early stage of this journey, but we’re excited to see the prospects for new treatments in the future.”