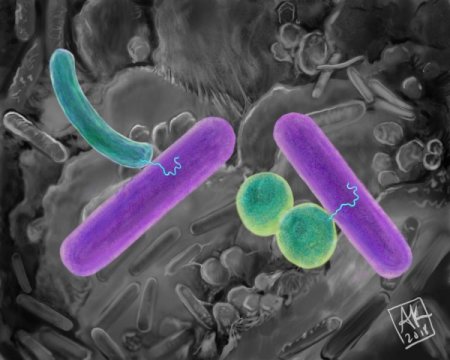 A team of scientists from the U.S. Army Research Laboratory and the Massachusetts Institute of Technology have developed and demonstrated a pioneering synthetic biology tool to deliver DNA programming into a broad range of bacteria.

This research was recently published in the journal Nature Microbiology, and was featured as the cover of the September 2018 issue.

The research was sponsored, in large part, by the Office of the Secretary Defense through a Laboratory University Collaborative Initiative, or LUCI, program to provide early access and accelerate Department of Defense laboratory innovation through partnership and collaboration with leading scientists across the nation.

ARL researchers said they recognize the high maturation rate in the field of synthetic biology demands “strong ties to the broader community to take advantage of advancements and to influence the field as it progresses.”

That acceleration, in this case, is the Army’s ability to genetically engineer undomesticated microbes that either thrive in austere environments or, in many cases, access high value specialty material sets not possible with current technology.

Adams further explained that there is a need for broadly applicable synthetic biology tools that allow access to a wide range of microorganisms, including the most fundamental step of genetic engineering the ability to transfer DNA into a cell.

The team’s novel approach to address this problem uses an engineered Bacillus subtilis bacterium, termed XPORT, to deliver DNA in a highly precise and controlled fashion to a wide variety of bacteria.

The XPORT bacteria facilitated multiple demonstrations of newly programmed function, including fluorescent protein reporting, in 35 different bacteria, some of which were never before identified let alone characterized as they were only recently isolated from a soil moisture sensor at the laboratory.

In discussing the pervasive presence of bacteria in every environment and access to these microbes for the first time, MIT professor and corresponding author Dr. Christopher Voigt said, “Every Soldier, vehicle and weapon system is coated with living bacteria. We are looking forward to understanding how these bacteria change depending on the theater, now having the ability to control them for sustained optimal performance.”

This research is a prelude to the first DOD service laboratory synthetic biology program, termed Living Materials, set to officially launch in October 2018.

The long-term vision of this program is to impart living, reactive and responsive functions to materials for operation in Army relevant environments yielding disruptive capabilities, such as tunable assembled materials, self-healing and adaptation for advanced protection and transformative logistics.

The ARL Living Materials program lead and manuscript co-author Dr. Dimitra Stratis-Cullum explained “The next frontier in synthetic biology will bring unprecedented advances in high performance and smart materials, but will require moving the state-of-the-art from production of molecules to materials as well as from the laboratory to the field. This necessitates the Army to drive advances in tools for military relevant chassis and to bridge the gap in structure function relationships for high performance military materials.”

This research also has significant impacts outside of the DOD, the scientists said.

“In the paper, we demonstrate XPORT’s flexibility by engineering bacteria isolated from human skin, human feces and agricultural soil,” said lead author Dr. Jennifer Brophy. “Microbes from these environments are good candidates for probiotics that are engineered to enhance human health or agriculture.”

Army scientists believe it is imperative that the Army act now in order to counter adversaries who will leverage these advances for next generation threats in the future operational environment.