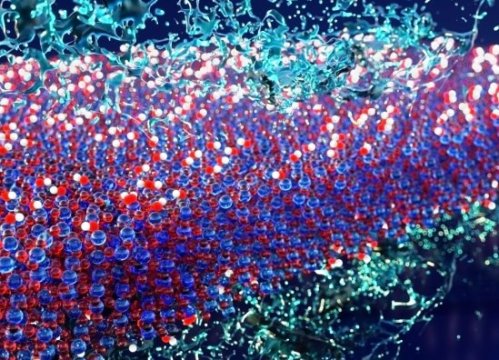 The dynamics of water near solid surfaces play a critical role in numerous technologies, including water filtration and purification, chromatography and catalysis. One well-known way to influence those dynamics, which in turn affects how water “wets” a surface, is to modify the surface hydrophobicity, or the extent to which the surface repels water. Such modifications can be achieved by altering the average coverage, or surface density, of hydrophobic chemical groups on the interface.

Now, in a paper published in the Proceedings of the National Academy of Sciences, lead author Jacob Monroe, a fifth-year Ph.D. student in the lab of UC Santa Barbara chemical engineer M. Scott Shell, provides a new perspective on the factors that control these dynamics. By using computer simulations to design the surfaces, the researchers were able to identify a more nuanced way in which surface hydrophobicity influences water dynamics at an interface. The findings could have important ramifications for membranes, especially those used in water filtration.

“What we’re seeing is that just changing the patterning alone — the distribution of those hydrophobic and hydrophilic groups, without changing the average surface densities — produces fairly large effects at an interface,” Monroe said. “That’s valuable to know if I want water to flow through a membrane optimally.”

Hydrophobic and hydrophilic groups often are present at some density in many types of materials, and while the rate at which water moves near a surface is not the only factor that impacts how a membrane performs, Monroe suggests that understanding those dynamics is one step toward designing more efficient membranes. And that, in turn, relates to the energy cost of filtration and to how easily contaminants can stick to the membrane walls and, thus, be removed from the water.

The researchers have not yet used the information about surface patterning to design materials for specific applications, though they plan to. But their finding about patterning holds immediate relevance for interpreting experiments, because it means that assessing the surface density of hydrophobic groups alone is not enough to characterize the material.

Monroe and Shell discovered the distribution effect by combining simulations of molecular dynamics with a genetic algorithm optimization, which is simply an algorithm that emulates natural evolution — here used to identify surface patterns that either increase or decrease surface-water mobility.

“It’s kind of like a breeding program,” Monroe explained. “If you had a pool of dogs and you wanted a certain kind of dog, say one that’s bigger or has a shorter tail or a bigger head, you would breed the dogs that have those characteristics. We do the same thing on a computer, but our goal is to design a surface having specific characteristics that allow it to perform how we want it to. You need the fitness metric, and then you can tune the genetic algorithm to optimize specific performance characteristics, for instance, to have water move quickly across a membrane or to adsorb on a surface. In another case, it could be how fast water is moving through a single pore in the surface. And in another, we could look at whether one species of contaminant sticks and another doesn’t.

“So, we run molecular dynamics simulations to assess those properties,” he continued. “We assign a level of fitness to each individual, and then we hybridize the most fit individuals spatially and drive the systems toward the properties we want them to have.”

Monroe believes that this method of sub-nanoscale surface patterning is an important design parameter for engineering solid-water interfaces for multiple applications, and that it can provide a broad strategy for engineering materials having designed hydration-water dynamics.

“This work is exciting because it shows for the first time that nanoscale patterning on surfaces is an effective means of engineering materials that give rise to unique water dynamics,” Shell said. “It has long been thought that biological molecules, like proteins, use surface chemical patterning to influence water dynamics toward functional ends, such as accelerating binding events that underlie many biomolecular processes. We have now used a computational optimization algorithm to ‘learn’ what these patterns should look like in synthetic materials having target performance characteristics. The results suggest a new way to design surfaces to precisely control water dynamics near them, which becomes widely important to chemical separations and catalysis tasks.”