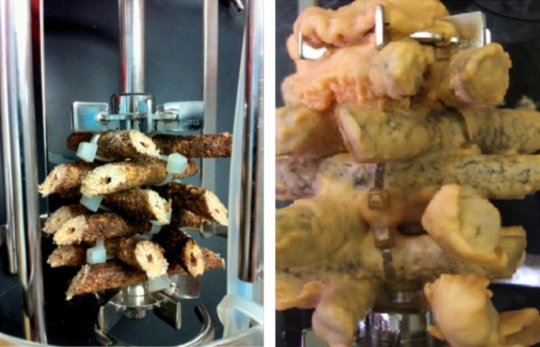 In an innovative study that promises to reduce production costs for the most potent form of vitamin K — Menaquinone-7, Penn State researchers have developed a novel method to enhance the fermentation process that creates the supplement by agitated liquid fermentation in a biofilm reactor.

The new process, assuming it can be scaled up to industrial production, is important because recent studies conducted by universities in the Netherlands and UCLA School of Medicine, among others, show essential health benefits associated with large doses of vitamin K — especially the Menaquinone-7 form, known as MK-7. These benefits include reducing risks of cardiovascular disease and strokes, osteoporosis, and even battling cancer.

Foods that are rich in vitamin K — such as kale, red meat and egg yolk — do not provide enough of the vitamin to achieve high-dose therapies, which will require supplements.

However, MK-7 production on an industrial level is expensive and limited because the bacterial fermentation needed to create the vitamin so far has relied on “static” fermentation strategies that are inadequate to ramp up output of the vitamin.

The present production system — incorporating shallow trays of solid, soy-based medium growing microorganisms only on the surface — will not support the expected increased demand for vitamin K, explained researcher Ehsan Mahdinia, a postdoctoral scholar in food science at Penn State.

“Using biofilm reactors, however, appears to be a practical alternative,” said Mahdinia. “Biofilm reactors provide a controlled environment for the microorganisms to form mature and robust biofilms that enable them to produce value-added products such as vitamin K with increased efficiency.”

Integral to the ability of biofilm reactors to produce vitamin K are specially designed internal plastic composite supports that microorganisms adhere to and on which they build intertwined colonies — called biofilms — that can withstand aeration and agitation needed to spur the microorganisms to secrete more vitamin K.

“The supports [comprise] half plastic and half soybean hulls, with other nutrients mixed in, that are extruded together at high temperatures,” said Mahdinia. “The composite material is porous enough to allow microbes to colonize and hold onto it. At the same time, it is hard enough that the supports do not fall apart when they are in the liquid.”

The study looked at producing MK-7 with an improved fermentation process, comparing the performance of strains of the microorganisms that create vitamin K. Researchers evaluated Bacillus species such as Bacillus subtilis natto, Bacillus licheniformis and Bacillus amyloliquifaciens.

Bacillus subtilis natto was determined to be the most efficient microorganism to be used in future Penn State studies in biofilm reactors, according to Mahdinia.

It is a type of bacteria that produces fermented soy food such as Japanese traditional sticky natto, he pointed out.

“Natto is a goo resulting from the microbes partially digesting soybeans, and like all fermented foods, it is very nutritious,” he said. “It’s basically rotten soybeans. I have been told it doesn’t taste good, but I must admit that I have never had the courage to taste it.”

Finally, researchers experimented with the liquid medium, suspending and feeding the microorganisms in 12-day fermentation runs. The medium started as a soy broth supplemented with 0.8 percent yeast extract. In the study, they tested the addition of glucose and glycerol to the base media in the biofilm reactors.

“Our results indicated that ‘fed-batch’ strategies can be significantly effective in glucose-based medium, rendering the biofilm reactors a promising replacement for static fermentation strategies. Under the same operational and medium conditions, suspended-cell bioreactors (with no biofilm present) could not reach MK-7 concentrations higher than 8.7 milligrams per liter, while in biofilm reactors concentrations were higher than 28.7 milligrams per liter — a 2.3-fold enhancement.”

Ali Demirci, Penn State professor of agricultural and biological engineering, whose research group in the College of Agricultural Sciences conducted the study, has high hopes for this new technology. He is planning to scale up the 2-liter laboratory biofilm reactors and introduce pilot scale fermenters of perhaps 200 liters.

“We believe those pilot scale biofilm reactors can produce a significant amount of vitamin K to compete with what is done in industry right now,” he said. “Then we hope we can turn this into a patent and go to the industry and say, ‘you can easily scale up these liquid fermenters to thousands of liters, similar to what is in use now for bioethanol production.’ Each fermenter can reach up to 850,000 gallons of volume and produce much larger amounts of vitamin K.”

The research, recently published in Applied Microbiology and Biotechnology, was Mahdinia’s doctoral thesis. He recently graduated with a doctoral degree in agricultural and biological engineering.

Also collaborating in the research was Aydin Berenjian, University of Waikato, New Zealand.

The U.S. Department of Agriculture’s National Institute of Food and Agriculture supported this work.