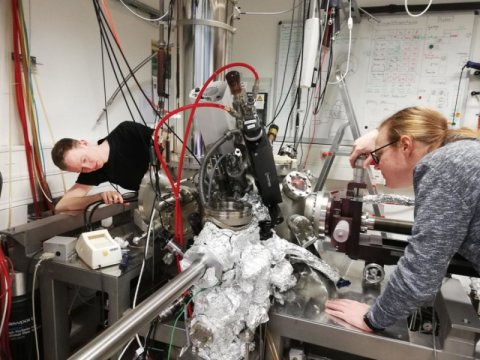 A team of physicists at the University of Cologne has, for the first time, seen a particularly exotic behaviour of electrons on an atomic scale. Electrons normally move almost freely through three-dimensional space. However, when they are forced to move in only one dimension — i.e. in a chain of atoms — they begin to act rather strangely. The Tomonaga-Luttinger liquid theory predicted this decades ago. In the lab, however, this phenomenon has so far only been shown indirectly. An international research team led by Professor Dr Thomas Michely at the University of Cologne’s Institute of Physics II has now produced one-dimensional wires, allowing them to witness the behaviour of trapped electrons in 1D with the scanning tunnelling microscope. They report on their discovery in the journal Physical Review X.

‘In 1950, Japanese physicist and later Nobel laureate Shin’ichiro Tomonaga imagined what electrons would do in a metal reduced to one dimension, that is, a chain of single atoms’, said Michely. ‘The remarkable consequences that ensue when electrons can no longer avoid each other are particularly fascinating for us physicists. In a real 3D crystal, their interaction is rather weak because they are quite free to move around in such an “open” system. In 1D, however, the electrons simply cannot avoid each other and begin to interact strongly.’

Electrons normally carry a ‘spin’ — a quantum mechanical angular momentum — and a charge. However, in 1D they stop behaving like normal electrons due to their strong interaction. Instead, they divide into two types of quasi-particles that have either spin or charge. Here electrons are better described as two independent waves: a spin density wave and a charge density wave. This phenomenon is called spin-charge separation and is the crux of the Tomonaga-Luttinger liquid theory, named after Tomonaga who first formulated it in 1950 and the American theoretical physicist Joaquin Mazdak Luttinger who developed the theory further.

To be able to see this spin-charge separation locally for the first time, the researchers from Cologne trapped the so-called Tomonaga-Luttinger liquid in wire of finite length, essentially locking it in a cage. Due to the wire’s finite length, standing electron waves with discrete energies are formed, as required by quantum mechanics. With this trick, it is now possible to explore the limits of Luttinger and Tomonaga’s theories with a precision unfathomable at their time.

The research group at the Institute of Physics II specializes in the production and exploration of 2D materials, such as graphene and monolayer molybdenum disulfide (MoS2). They found that at the interface of two MoS2 islands, one of which is the mirror image of the other, a metallic wire of atoms formed. The researchers were able to visualize the standing waves along the wire and their discrete energies with the help of their scanning tunnelling microscope, at the very low temperature of -268 °C (5 Kelvin).

To their complete surprise, the scientists discovered two sets of standing waves in the wire, while for ‘normal’ independent electrons only one set would have been expected. The key to explaining the phenomenon came from the theoretical physicists around Professor Dr Achim Rosch, also University of Cologne: the two sets of standing waves represent the spin density and the charge density waves, as Tomonaga and Luttinger predicted half a century ago.

The scientists are now planning to investigate the behaviour of the electrons in one-dimensional cages even more closely. To test the limits of the Tomonaga-Luttinger liquid theory, they want to conduct new experiments at temperatures more than ten times lower (0.3 Kelvin) and in an improved ‘cage’.