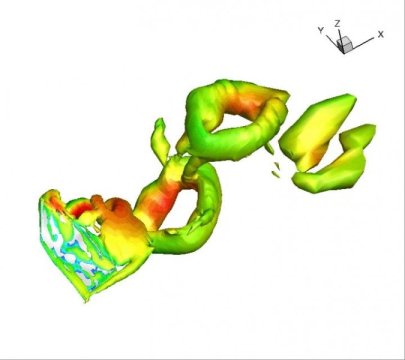 Bats are among nature’s best flyers — able to fly for long periods of time, maneouvre in mid-air with pinpoint precision and get into some very tight spaces. However, scientists have not fully understood exactly how bats manage to fly so well, until now.

Engineers at the University of British Columbia have captured the full complexity of bat flight in a three-dimensional computer model for the first time, potentially inspiring the future design of better drones and other aerial vehicles.

Researchers built a simple bat wing out of aluminum and exposed it to the currents in a wind tunnel to mimic the flapping, bending and twisting motion of a bat in flight. By tracking and measuring the impact of these movements on turbulent air flows and aeromechanical forces around the wing, they were able to build a complete model of bat flight.

The computer model, described in Computers & Fluids, is the first to comprehensively explain the flapping flight of bats in terms of the wing’s geometry in motion, says Rajeev Jaiman, the study’s senior author and a professor of mechanical engineering at UBC.

“Previous numerical models of bat flapping flight were too simplified or incomplete to be of real practical benefit,” he added.

Bat wings are highly unique because they contain multiple joints and stretchable membranes that allow them to change shape and return to their original form countless times when they fly, explained Jaiman.

“While this wing morphing makes bat flight much more complicated compared to bird flight, it also makes bats the efficient flying machines that they are,” he said.

The research team, which includes engineers from the National University of Singapore, plans to develop a physical bat model next, in collaboration with researchers at Brown University.

“We’ll be working to further optimize the flapping motion,” said Jaiman. “Once this is in place, we’ll have a foundation for designing efficient, agile, automated bats — think smart drones that can fly as a flock and serve as tools for business or for emergency response.”