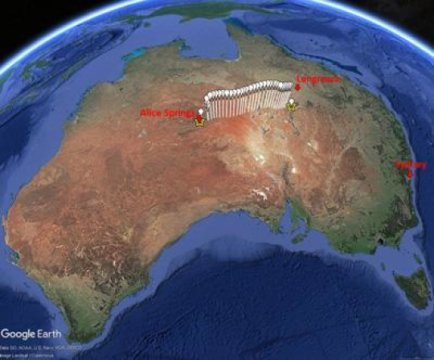 Nuclear emulsion film can record tracks of high-energy charged particles at the highest accuracy level in the world. The gamma telescope developed by the GRAINE project is able to automatically analyze a large surface area of this film and add time stamps, creating a telescope with the world’s best angular resolution capabilities, polarization sensitivity, and the world’s largest aperture. Building on research developments and balloon experiments in 2011 and 2015, the team has refined the ability of the emulsion telescope to observe high energy cosmic gamma rays through balloon flights.

The balloon experiment in Australia in April 2018 aimed to observe Vela Pulsar, a known bright source of gamma rays. The final preparations for the balloon experiment were completed in March at the launch site in Alice Springs, and then came the wait for high-altitude winds to fulfil the conditions for flying.

Twice the predictions for suitable high-altitude winds were made and they prepared for launch, but the ground-level winds were not sufficient for launch and the launch was postponed. On April 26 the predicted high-altitude and ground-level winds fulfilled launch and flight conditions, and at 6:33am local time they succeeded in the launch. The balloon rose steadily, reaching an altitude of 38km after two hours, before being blown east by the wind and starting a horizontal drift. After a length of time that covered the observation window for Vela Pulsar (15-22 o’clock), at 22:19 the team stopped the emulsion telescope. Having carefully predicted its landing spot, at 23:17 they detached the balloon and used a parachute to land the telescope at 23:54, approximately 900km east of Alice Springs at a longitude of 250km SW.

During May, they successfully completed processing the emulsion film for a total of 489 sheets of film with a combined area of 43.8 square meters. This marked the final stage of the 2018 emulsion telescope balloon experiment in Australia.

The collaboration comments, “Our team is currently analyzing the flight data with the aim of detecting Vela Pulsar and checking the general performance of the telescope. After this, we will repeat long flights for the large-aperture emulsion telescope with the aim of beginning scientific observations.”

This research was carried out using a Grant-in-Aid for Scientific Research (S) from the Japan Society for the Promotion of Science for the project “Cosmic gamma-ray observation by balloon borne emulsion telescope to study unsolved issues” (Representative: Shigeki Aoki, Research Project Number: 17H06132).