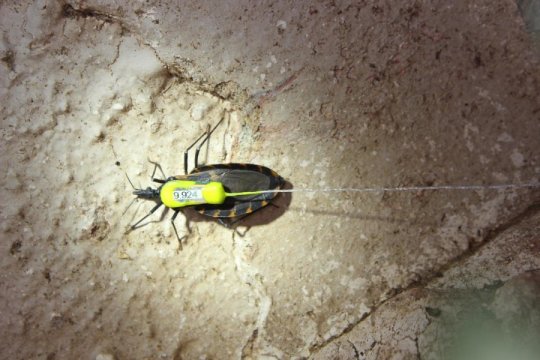 With the continuing advance of technology, radio tracking devices keep getting smaller and smaller. And that’s bad news for stealthy insects like kissing bugs.

In a new pilot study, researchers in Texas successfully attached miniature radio transmitters to kissing bugs and tracked their movements. Kissing bugs, also known as triatomine bugs, are a group of bloodsucking insects, found in Latin America and the southern United States, that transmit the pathogen that causes Chagas disease in humans and animals. They typically move at night and hide during day, and uncovering their secretive movements could play a key role in reducing their impact as a disease vector. The study’s findings are published in a new report in the Journal of Medical Entomology.

“While studying kissing bugs in Texas, we have been perplexed regarding their movement behavior,” says Gabriel Hamer, Ph.D., assistant professor of entomology at Texas A&M University and lead author on the study. During the bugs’ adult dispersal season, for instance, Hamer’s team has observed dozens of kissing bugs appear to synchronously emerge from natural habitat and arrive at homes. “Where are they coming from? How far are they traveling? Why are they dispersing? These observations and others provided the motivation to try to utilize a methodology to track wild kissing bugs and study movement.”

Hamer and colleagues worked with three homeowners who have routinely found kissing bugs around their homes. The researchers searched out kissing bugs at night, captured them, and used superglue to attach a radio transmitter weighing just 0.2 grams to the back side of each bug’s abdomen. They tagged and tracked 11 bugs in all, and they painted the transmitters with fluorescent paint to aid in re-discovery.

Returning in subsequent days and nights, Hamer’s team was able to track 18 total movement events of the 11 bugs, ranging between one and 12 days later. The average distance moved — by walking only — was 12.5 feet, with a maximum of about 66 feet.

One particular bug the researchers tracked revealed just how elusive kissing bugs can be: It was initially captured near a dog kennel and was found the next day in a small slit where the top and bottom of the plastic kennel fit together. “This would have been a very difficult location to find without the use of radio telemetry,” Hamer says. “The owner, who has historically lost several dogs to canine Chagas disease, regularly removes kissing bugs from inside and under the kennels, but any kissing bugs in the cryptic hiding location in the joint of the doghouse would have been missed.”

Past studies have used radio transmitters to track beetles, bees, and other large insects — and much larger animals, of course — but never for arthropod disease vectors. The method is well suited to kissing bugs in part because they are a large blood-feeding insect and also because of the difficulty in using other mark-release-recapture methods, such as marking insects with paint.

“A challenge with kissing bugs is their population densities are typically low,” Hamer says, “and given that the recapture rate would be expected to be very low (less than 5 percent), you would need to mark and release a lot of individuals in order to conduct a mark-release-recapture study.”

The study marks an initial foray into tracking triatomines via radio telemetry, but it can open the door for more in-depth studies into kissing bugs’ movements. Hamer says he is eager to continue this research and hopes other entomologists and vector-management researchers will take advantage of advances in radio telemetry to track behavior of kissing bugs and other insects.

“Kissing bug dispersal and movement behavior is fundamentally involved in the exposure of dogs and humans to the agent of Chagas disease. We hope that our research can continue to make advancements in our understanding of this kind of basic biology of the insect vector that will improve our ability to intervene and minimize Chagas disease,” says Hamer.

Materials provided by Entomological Society of America. Note: Content may be edited for style and length.