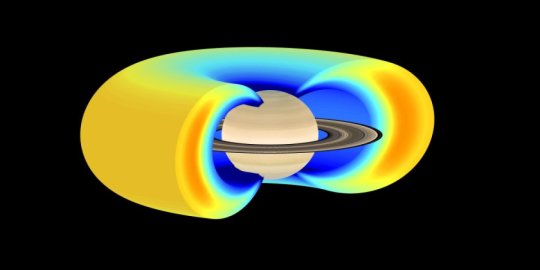 A team of international scientists from BAS, University of Iowa and GFZ German Research Centre for Geosciences has discovered a new method to explain how radiation belts are formed around the planet Saturn.

Around Saturn, and other planets including the Earth, energetic charged particles are trapped in the magnetic field. Here they form doughnut-shaped zones near the planet, known as radiation belts, such as the Van Allen belts around the Earth where electrons travel close to the speed of light.

Data collected by the NASA Cassini spacecraft, which orbited Saturn for 13 years, combined with a BAS computer model have provided new insights into the behaviour of these rapidly-moving electrons. The discovery overturns the accepted view among space scientists about the mechanisms responsible for accelerating the electrons to such extreme energies in Saturn’s radiation belts. The team’s results are published in the journal Nature Communications this week (Thursday 29 November).

It has always been assumed that around Saturn, electrons are accelerated to extremely high energies by a process called radial diffusion, where electrons are repeatedly nudged towards the planet, increasing their energy. An alternative way of accelerating electrons is their interaction with plasma waves as happens around the Earth and Jupiter with Chorus waves. Around Saturn, Chorus waves have been dismissed as ineffective; however, the authors discovered that in Saturn’s unique environment, it is another form of plasma wave called the Z-mode wave that is critical.

“This research is really exciting because the high energy electrons in the radiation belt around Saturn have always been assumed to come from radial diffusion. We’ve identified a different way to create a radiation belt that no one knew of before.

“This study provides us with a better understanding of how radiation belts work across the Solar system and will help modellers forecast space weather more accurately at the Earth, which in turn will protect both astronauts and satellites from radiation hazards.”

“Saturn gave us the opportunity of abundant Z-mode waves, to really test what these waves can do to the electrons on a large scale.

“Some people think that planets are just cold chunks of rock travelling through empty space, but the way each planet interacts with the particles in space is complex, unique and exquisite, and studying them can tell us about our own planet and the rare extreme events that occasionally do occur.”

“I think it’s most critical to understand the extreme radiation environments of the outer planets. These studies provide us with a unique opportunity to evaluate the potential extremes of terrestrial space weather and to understand what space weather conditions may be around planets beyond our Solar system (exoplanets).”

The team concludes that electron acceleration by Z-mode waves is more rapid at energising electrons in Saturn’s radiation belt than radial diffusion and both mechanisms will work together to maintain the radiation belt at Saturn.