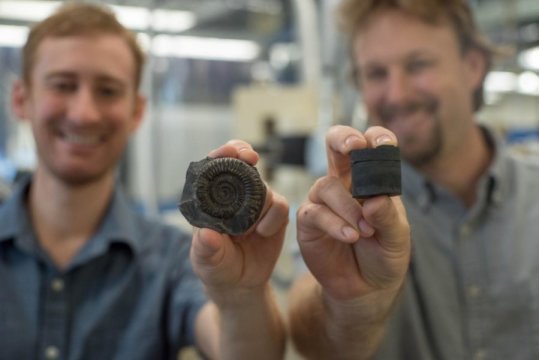 Global climate change, fueled by skyrocketing levels of atmospheric carbon dioxide, is siphoning oxygen from today’s oceans at an alarming pace — so fast that scientists aren’t entirely sure how the planet will respond.

Their only hint? Look to the past.

In a study to be published this week in the journal Proceedings of the National Academy of Sciences, researchers from Florida State University did just that — and what they found brings into stark relief the disastrous effects a deoxygenated ocean could have on marine life.

“We want to understand how volcanism, which can be related to modern anthropogenic carbon dioxide release, manifests itself in ocean chemistry and extinction events,” said study co-author Jeremy Owens, an assistant professor in FSU’s Department of Earth, Ocean and Atmospheric Science. “Could this be a precursor to what we’re seeing today with oxygen loss in our oceans? Will we experience something as catastrophic as this mass extinction event?”

For this study, an international team of scientists set out to better understand today’s oxygen-deprived oceans by investigating the Toarcian Oceanic Anoxic Event (T-OAE), an interval of global oceanic deoxygenation characterized by a mass extinction of marine organisms that occurred in the Early Jurassic Period.

“We wanted to reconstruct Early Jurassic ocean oxygen levels to better understand the mass extinction and the T-OAE,” said Theodore Them, a postdoctoral researcher at FSU who led the study. “We used to think of ocean temperature and acidification as a one-two punch, but more recently we’ve learned this third variable, oxygen change, is equally important.”

By analyzing the thallium isotope composition of ancient rocks from North America and Europe, the team found that ocean oxygen began to deplete well before the defined time interval traditionally ascribed to the T-OAE.

That initial deoxygenation, researchers say, was precipitated by massive episodes of volcanic activity — a process not altogether unlike the industrial emission of carbon dioxide we’re familiar with today.

“Over the past 50 years, we’ve seen that a significant amount of oxygen has been lost from our modern oceans,” Them said. “While the timescales are different, past volcanism and carbon dioxide increases could very well be an analog for present events.”

When the atmosphere is suffused with carbon dioxide, global temperatures climb, triggering a cascade of hydrological, biological and chemical events that conspire to sap the oceans of oxygen.

Scientists have found evidence that several hundred thousand years before the T-OAE, volcanoes flooded Earth’s atmosphere with carbon dioxide, helping to set in motion the sequence of events that would ultimately result in oceanic deoxygenation and widespread marine life extinction.

While researchers have long surmised a link between volcanism, loss of oxygen and mass extinction, this study provides the first conclusive data.

“As a community, we’ve suggested that sediments deposited during the T-OAE were indicative of widespread oxygen loss in the oceans, but we’ve never had the data until now,” Them said.

Prehistorical examples of carbon dioxide deluges and suffocating oceanic deoxygenation provide a lesson in how Earth systems respond to a variable climate.

This analysis of the T-OAE, and the onset of deoxygenation that preceded it, is another in a lineage of reports that presage a bleak future for oceans with diminishing levels of oxygen.

“It’s extremely important to study these past events,” Them said. “It seems that no matter what event we observe in Earth’s history, when we see carbon dioxide concentrations increasing rapidly, the result tends to be very similar: a major or mass extinction event. This is another situation where we can unequivocally link widespread oceanic deoxygenation to a mass extinction.”

Steps can still be taken to curb oxygen loss in the modern oceans. For example, conserving important wetlands and estuaries — along with other environments that absorb and store large amounts of carbon dioxide — could help to blunt the effects of harmful industrial emissions.

But should our oceans’ oxygen contents continue to decline at their current rates, future marine organisms could be doomed to the same fate that befell their Jurassic ancestors.

“If you’re an oxygen-consuming organism, you don’t want to see major changes in marine oxygen levels,” Them said. “You either adapt or go extinct.”

Measurements for this study were conducted at the FSU-based National High Magnetic Field Laboratory. The research was funded by the National Science Foundation and the National Aeronautic and Space Administration.