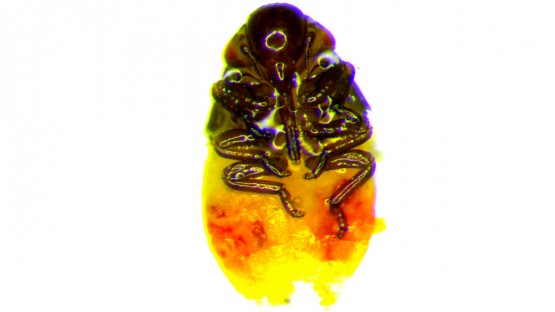 A new study examines the symbiotic relationship between two types of bacteria and spittlebugs that helps the insect live on very low-nutrient food. The bacteria use a metabolic “trick” also employed by cancer cells to create the right conditions for converting the poor food into the necessary building blocks for survival.

Spittlebugs get their name from the bubbly spit they create in plant branches. The clusters of spit keeps them from drying out and allow them to hide from predators. There they feed on xylem plant sap, a very low-value food; xylem transports water and minerals from the plant’s roots to its leaves.

“No animal should be able to subsist on xylem alone – it’s really just water and a few nutrients,” said lead author Nana Ankrah, a postdoctoral researcher in the lab of Angela Douglas, the Daljit S. and Elaine Sarkaria Professor of Insect Physiology and Toxicology in the Department of Entomology in the College of Agriculture and Life Sciences.

The answers to how these bugs survive lie in two types of bacteria that live in separate spittlebug organs, called bacteriomes; one is red, the other orange. Other similar insects that feed on plant sap have just one bacterial partner to help produce high-quality amino acids, the building blocks of proteins.

“We wanted to understand if there were any advantages to having two bacterial symbionts on this very poor diet,” Ankrah said.

They discovered that the red bacteriome uses a process known as aerobic glycolysis to process glucose, from which the bacteria synthesize seven essential amino acids. Two byproducts of this process, pyruvate and lactate, are assimilated by the orange bacteriome to create ATP molecules, which make energy for cells. The energy boost from ATP allows the bacteria in the orange bacteriome to produce three additional essential amino acids that require a great deal of energy to produce.

Having two bacterial partners instead of one works because they have this method for exchanging products from one bacterium to the other to increase the overall energy available to them, Ankrah said.

“To our knowledge,” Ankrah said, “our article is the first demonstration of aerobic glycolysis as a strategy to facilitate amino acid production in symbioses.”

Future studies will investigate glycolysis in other insect and bacteria partnerships, he said.

Douglas is co-senior author with Ludmilla Aristilde, an adjunct associate professor in the Department of Biological and Environmental Engineering in CALS.