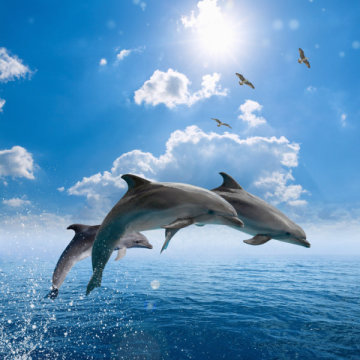 Important new research released ahead of World Oceans Day exposes the widespread practice of killing aquatic mammals such as dolphins, sea lions, seals and otters for use as bait in global fisheries. Published in open-access journal Frontiers in Marine Science, the study shines a new light into what researchers say is an issue that has so far received little attention within the scientific and conservation communities.

Bycatch — the incidental capture of dolphins, sea turtles, birds and other non-targeted species in fishing operations — is a well-known problem. Less well-known is the widespread practice of acquiring and using aquatic mammals for bait. According to the researchers’ new systematic review, more than 40 species of aquatic mammals have been utilized as bait since 1970 in at least 33 countries, with more than 80% of these species deliberately killed for use in at least one fishery. Dolphins, for example, are commonly killed and used as bait in shark fisheries. Geographically, the practice appears to be most common in Latin America and Asia.

The study’s lead author, Dr. Vanessa J. Mintzer from the University of Florida, USA, says while the reviewed sources reveal that killing marine mammals for bait is widespread, there is little information on the status of the populations being killed and whether, or how fast, they are declining. However it is clear, based on a few locations where this information is available, that killing for bait can reach unsustainable levels and lead to population decline. Dr. Mintzer says witnessing this, first hand, prompted this latest scientific review.

“Killing for use as bait is a primary threat affecting Amazon river dolphins, known as botos — the species and issue I have studied since my Ph.D. dissertation. With this global review we wanted to see whether, and where, other species were killed for bait, and learn about possible solutions to stop the problem,” says Dr. Mintzer.

The killing of marine animals for bait is, in general, a clandestine activity. As a consequence, the level of killing and impact on the species identified in the review will likely remain largely unknown for the foreseeable future. Dr. Mintzer says obtaining better data should now become an urgent priority.

“For scientists already working on species and locations identified as “hot spots” in this review, organized efforts should begin right away to estimate these numbers,” she says. “It took years to determine that the hunt for botos was unsustainable and now conservation actions need to be expedited. We need to identify other affected populations now to facilitate timely conservation actions.”

The study’s authors also urge a focus on the enforcement of existing laws that make it illegal to kill marine mammals as well as the involvement of local communities and fishers in education and sustainable fishing programs and policies, as opposed to top-down implementation, to ensure success.

One key limitation faced by the researchers was a lack of information on the magnitude of the problem — that is, how many animals in a specific area or region are killed to procure bait and the impacts of this practice on the affected populations. While the authors’ analysis was constrained accordingly, the researchers say that lack of data is a common challenge faced by fishery managers and indicates clearly the broader need for additional resources for monitoring and assessment.

Materials provided by Frontiers. Note: Content may be edited for style and length.