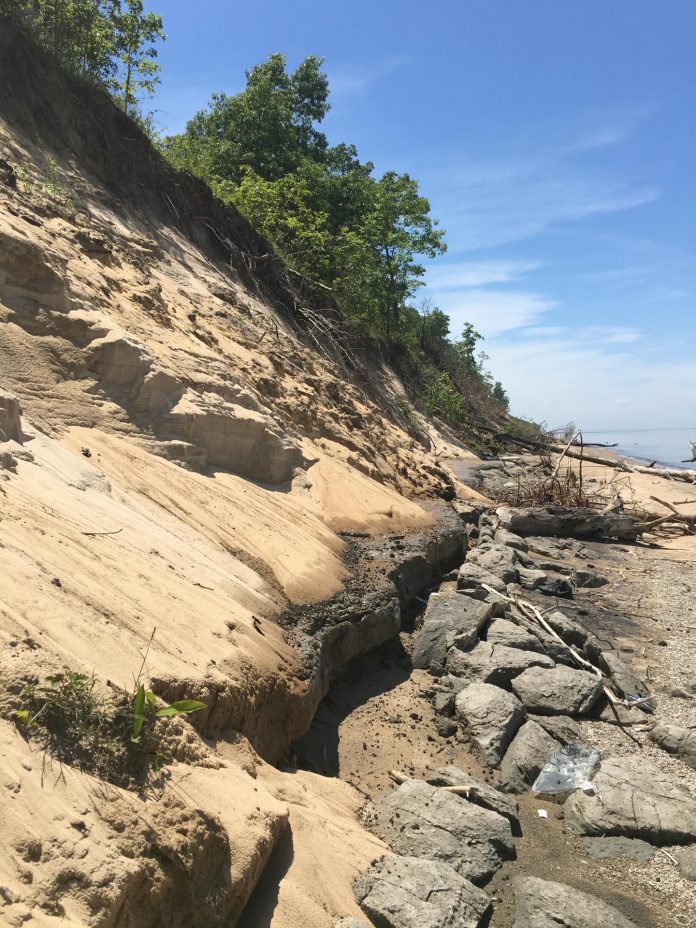 Every summer millions of people visit parks and protected areas along the shorelines of the Great Lakes to camp, hike, swim and explore nature’s beauty.

A new study by a graduate student at The University of Toledo zeroes in on how coastal flooding and erosion in 2019 damaged park facilities and roads and interrupted visitor experiences, as well as examines the financial cost of the high water levels.

The research presented at the 2020 Great Lakes Virtual Conference, which is hosted by the International Association of Great Lakes Research, was completed by Eric Kostecky, a graduate student earning his master’s degree in geography, as part of a course in environmental planning he took last fall while completing his undergraduate degree in geography and planning.

“A humbling statistic is that 75% of the parks indicated that continued higher lake levels in 2020 and beyond would further impact park operations and infrastructure,” Kostecky said. “Future management actions would be to improve parking lots and roads and to move hiking trails, campgrounds and public access locations.”

To gather information, Kostecky surveyed 50 parks along the Great Lakes, both federal and state parks in the United States and provincial parks in Canada. Twenty-nine responded.

“Even though Great Lakes parks and protected areas have experienced impacts from shoreline erosion and flooding during previous high water-level events in 1972-73 and 1985-86, this study is the first comprehensive attempt to catalogue those impacts,” said Dr. Patrick Lawrence, professor and chair of the UToledo Department of Geography and Planning and Kostecky’s faculty advisor.

The study shows 50% of the responding parks were impacted by both shoreline erosion and flooding, with the most common type of damage being to boat launches and building structures that were flooded, and roads near dunes washed away by waves.

As a result of the damage, parks implemented a variety of changes for public safety last year: sections of the park were closed, select park operations were canceled, and some visitor education programs were suspended.

Great Lakes water levels peaked in July 2019, with increases varying between 14 and 31 inches above their long-term averages; Lake Superior was at 14 inches above its average, while Lake Michigan, Lake Huron, Lake Erie and Lake Ontario were at 31 inches above average, Lawrence said.

“The water levels in the Great Lakes fluctuate, but they don’t fluctuate rapidly, so it’s hard to say if we’re still in the upswing or on the downswing,” Kostecky said. “We won’t know if we’re continuing to rise or if waters have started to recede for the next couple of years.”

“Many parks and protected areas in the Great Lakes have struggled with the economic costs and interruptions of their operations, including services and programs for their visitors, and are concerned that as this period of high water levels continues this summer, they will face ongoing challenges in delivering the levels of public access and services to their visitors so eager to explore the parks and enjoy the nature and environment provided by these special spaces,” Lawrence said.