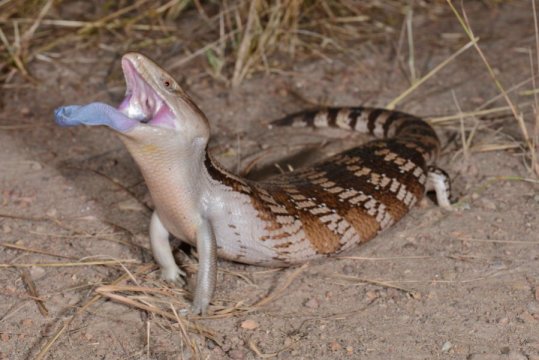 When attacked, bluetongue skinks open their mouth suddenly and as wide as possible to reveal their conspicuously coloured tongues. This surprise action serves as their last line of defence to save themselves from becoming prey says Martin Whiting, of Macquarie University in Australia, who conceived the study just published in Springer’s journal Behavioral Ecology and Sociobiology. The research revealed that the back of the northern bluetongue skink’s tongue is much more UV-intense and luminous than the front, and that this section is only revealed in the final stages of an imminent attack.

Bluetongued skinks of the genus Tiliqua are medium-large sized lizards widely found throughout Australia, eastern Indonesia and Papua New Guinea. They are well camouflaged but their strikingly blue tongues are distinct and are UV-reflective in species in which this has been measured. When attacked, they open their mouths wide to reveal their tongues.

The research team set out to investigate the tactics that bluetongue skinks use to ward off attackers, and focused on the largest of the bluetongue skinks, the northern bluetongue skink (Tiliqua scincoides intermedia). This omnivorous, ground-dwelling lizard of northern Australia is well camouflaged thanks to the broad brown bands across its back. However, birds, snakes, monitor lizards — all animals thought to have UV vision — are among its main predators.

First the researchers gathered information about the colour and intensity of different parts of the lizard’s tongue using a portable spectrophotometer to measure the tongues of thirteen skinks. The first exciting finding was that the blue tongue is actually a UV-blue tongue. The researchers then established that the rear of the skinks’ tongues was almost twice as bright as the tips. When a predator approached, the skinks would remain camouflaged until the very last moment, before opening their mouths widely and revealing their highly conspicuous UV-blue tongues.

The next part of the study involved simulating ‘attacks’ on these lizards using model (fake) predators. The team used a snake, a bird, a goanna (monitor lizard), a fox and a piece of wood as a control. The model predator attacks were simulated within a controlled environment.

“The lizards restrict the use of full-tongue displays to the final stages of a predation sequence when they are most at risk, and do so in concert with aggressive defensive behaviours that amplify the display, such as hissing or inflating their bodies,” explains lead author Arnaud Badiane. “This type of display might be particularly effective against aerial predators, for which an interrupted attack would not be easily resumed due to loss of inertia.”

The more intense the attack and the risk they were experiencing, the more full-tongue displays the animals were seen to use, and the greater section of their tongues they would reveal. Such displays were also most often triggered by attacking birds and foxes, rather than by snakes or monitor lizards.

“The timing of their tongue display is crucial,” adds Badiane. “If performed too early, a display may break the lizard’s camouflage and attract unwanted attention by predators and increase predation risk. If performed too late, it may not deter predators.”