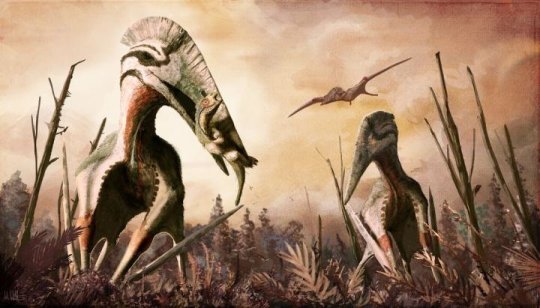 Whenever we think about extinct animals we often imagine them eating their favourite meals, whether it be plants, other animals or a combination of both.

But are our ideas about extinct diets grounded within scientific reasoning, or are they actually little more than conjecture and speculation?

New research, published in Biological Reviews and led by a team of palaeobiologists from the University of Leicester, has revealed that the diets of pterosaurs are largely based on ideas that have been uncritically accepted for decades, or even centuries — and may often be wrong.

The study shows that one group of extinct animals where our dietary knowledge is lacking are the pterosaurs; extinct flying reptiles who lived in the Mesozoic Period 215-66 million years ago.

The research involved a comprehensive analysis of the scientific literature, summarising over 300 statements from 126 studies about the diets of pterosaurs, and the types of evidence used to support ideas of what they ate.

The research shows the vast majority of ideas about pterosaur diet are based on inferences drawn from modern organisms and/or the environments in which pterosaur fossils are preserved. These are not always reliable.

Jordan Bestwick, a PhD student from the School of Geography, Geology and the Environment, and lead author of the study, said: “Working out the diets of extinct animals is vitally important for understanding how they fitted within their respective ecosystems, which can tell us about how present ecosystems function and may change in the future.

“Being able to robustly test ideas is a key attribute of the scientific process, and helps us fully understand what we can know about the lifestyles of extinct animals, and what we can never know.”

Analysis reveals that over sixty percent of all hypotheses of pterosaur diet are based on simplistic anatomical comparisons between pterosaurs and modern organisms, particularly of the skulls and teeth. A key problem with this is that many of these interpretations are difficult, if not impossible, to test.

“We find for some pterosaurs there is strong agreement among researchers as to their likely diet. Pteranodontids for example, which include one of the best known pterosaurs, Pteranodon, are almost unanimously agreed to have been fish feeders, an idea that is independently supported by multiple lines of evidence.

“In contrast, there is far less agreement as to what the giant azhdarchid pterosaurs ate. Azhdarchids can reach sizes of up to 10 metres or more in wingspan, like Hatzegopteryx, and there have been at least six different diets argued for these pterosaurs.”

However techniques like these are employed in a small minority of studies and as such, it is currently not possible to identify the biological reasons that might explain the range and diversity of pterosaurs diets.

Dr David Hone from the Queen Mary University of London, who was not involved in the study, commented: “This is an important summary of what we know (and what we don’t) about what these animals fed on. This gives pterosaur researchers an excellent and critical starting point and a roadmap for future research on the diets of pterosaurs, and more broadly for all extinct animals.”