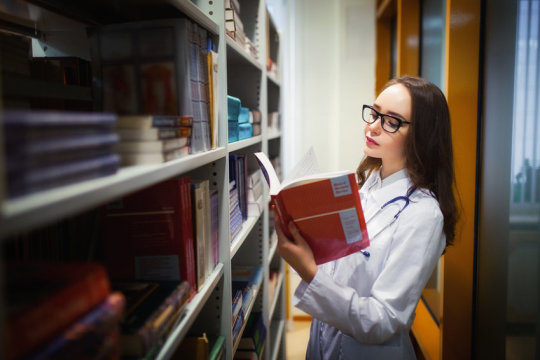 Spending more years in full time education is associated with a greater risk of developing short-sightedness (myopia), finds a study published by The BMJ today.

The researchers say their study provides “strong evidence” that more time spent in education is a risk factor for myopia, and that the findings “have important implications for educational practices.”

Myopia, or short-sightedness, is a leading cause of visual impairment worldwide. Currently, 30-50% of adults in the United States and Europe are myopic, with levels of 80-90% reported in school leavers in some East Asian countries.

Based on existing trends, the number of people affected by myopia worldwide is expected to increase from 1.4 billion to 5 billion by 2050, affecting about half of the world’s population. Almost 10% of these people (around 9 million) will have high myopia, which carries a greater risk of blindness.

Many studies have reported strong links between education and myopia, but it is not clear whether increasing exposure to education causes myopia, myopic children are more studious, or socioeconomic position leads to myopia and higher levels of education.

Analysing genetic information in this way avoids some of the problems that afflict traditional observational studies, making the results less prone to unmeasured (confounding) factors, and therefore more likely to be reliable.

An association that is observed using Mendelian randomisation therefore strengthens the inference of a causal relationship.

After taking account of potentially influential factors, Mendelian randomisation analyses suggested that every additional year of education was associated with more myopia (a refractive error of ?0.27 dioptres a year).

To put this into context, a university graduate from the UK with 17 years of education would, on average, be at least ?1 dioptre more myopic than someone who left school at 16 (with 12 years of education). This level of myopia would mean needing glasses for driving.

By contrast, there was little evidence to suggest that myopia led people to remain in education for longer.

The researchers point to some study limitations. For example, UK Biobank participants have been shown to be more highly educated, have healthier lifestyles, and report fewer health issues compared with the general UK population, which may have affected the results. However, there was little evidence that this could explain their findings.

“This study shows that exposure to more years in education contributes to the rising prevalence of myopia, and highlights a need for further research and discussion about how educational practices might be improved to achieve better outcomes without adversely affecting vision,” they conclude.

In a linked editorial, Professor Ian Morgan at the Australian National University and colleagues say the evidence suggests that it is not only genes but environmental and social factors that may have major effects on myopia.

They point to East Asia, where early intense educational pressures combined with little time for play outdoors has led to almost 50% of children being myopic by the end of primary school, compared with less than 10% in a study of British children.

“Early onset allows more time for myopia to progress to high and potentially pathological myopia,” they warn, and they argue that education systems “must change to help protect the visual health of future generations.”

Although reduced exposure to natural daylight might not be the sole mechanism to explain the association between education and myopia, she writes, “given the advantages of time spent outdoors on mental health and the protection it provides against obesity and chronic diseases, we might all benefit from spending more time outside.”