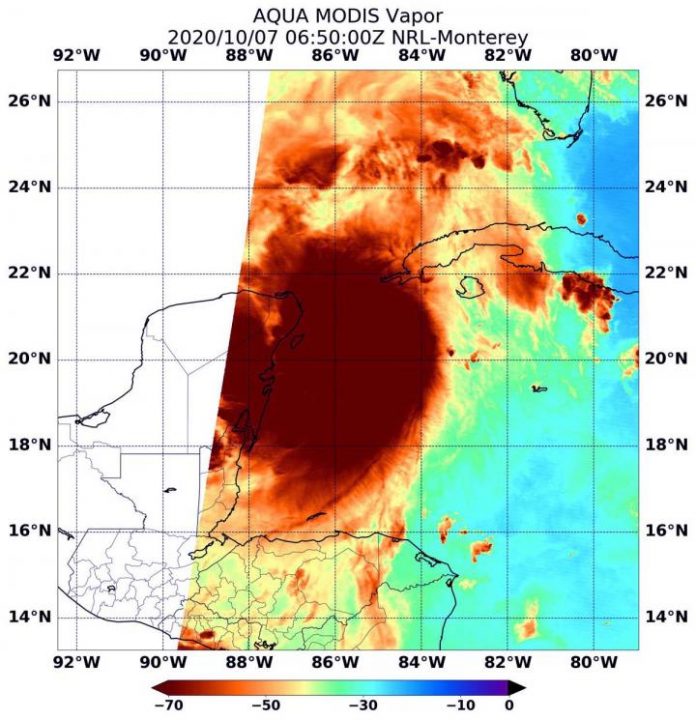 When NASA’s Aqua satellite passed over the Caribbean Sea on Oct. 7, it gathered water vapor data on Hurricane Delta as Mexico’s Yucatan continues to feel its effects.

Water vapor analysis of tropical cyclones tells forecasters how much potential a storm has to develop. Water vapor releases latent heat as it condenses into liquid. That liquid becomes clouds and thunderstorms that make up a tropical cyclone. Temperature is important when trying to understand how strong storms can be. The higher the cloud tops, the colder and stronger the storms.

NASA’s Aqua satellite passed over Delta on Oct. 7 at 2:50 a.m. EDT (0650 UTC), and the Moderate Resolution Imaging Spectroradiometer or MODIS instrument gathered water vapor content and temperature information. NASA’s Aqua satellite is one in a fleet of NASA satellites that provide data for hurricane research.

Warnings and Watches on Oct. 7

NHC issued a Hurricane Warning from Tulum to Dzilam, Mexico and for Cozumel. A Tropical Storm Warning is in effect for the Cuban province of Pinar del Rio; from Punta Herrero to Tulum, Mexico; and from Dzilam to Progreso, Mexico.

NHC forecasters said, “Although some additional weakening is likely when Delta moves over the Yucatan peninsula this morning, re-strengthening is forecast when the hurricane moves over the southern Gulf of Mexico Wednesday night and Thursday, and Delta could become a category 4 hurricane again by late Thursday.  Weakening is expected as Delta approaches the northern Gulf coast on Friday.

Hurricanes/tropical cyclones are the most powerful weather events on Earth. NASA’s expertise in space and scientific exploration contributes to essential services provided to the American people by other federal agencies, such as hurricane weather forecasting.

For more than five decades, NASA has used the vantage point of space to understand and explore our home planet, improve lives and safeguard our future. NASA brings together technology, science, and unique global Earth observations to provide societal benefits and strengthen our nation. Advancing knowledge of our home planet contributes directly to America’s leadership in space and scientific exploration.