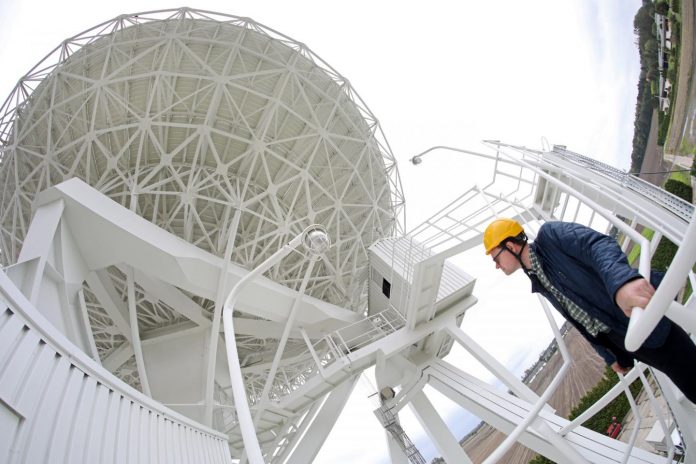 The publication is the result of many months of observations of radiation coming from the plane of the Milky Way, namely from the spiral arms of our galaxy, where a lot of matter, dust and gas accumulate. It is under such conditions that massive stars are born.

At the beginning it is worth noting that the formation of high mass stars is a complex process, less recognised by scientists than the formation of solar type stars. A massive star in its early stage of evolution cannot be seen – scientists do not have the tools of appropriate resolution. So only radio telescopes are at the astronomers’ disposal.

A young star, or only the emerging one, is surrounded by a cocoon of matter, so we can simply say that it is a real chemical “factory”. We can find a huge number of molecules, including methanol, the most basic alcohol, whose observations we have been focusing on,’ explains Prof. Anna Bartkiewicz.

In the cocoon of dusts and gases, there is a maser emission. This can be compared to a diode indicator – a laser. Except that the laser is amplified by light and the maser by microwaves. And it is the radiation that astronomers are able to observe.

– ‘Different types of particles send out radio waves at their own frequencies and this is how we can recognise them. For example, particles of methanol and water vapour illuminate at 6.7 GHz and 22 GHz respectively, which corresponds to wavelengths of 4.5 cm and 1.3 cm. We can say that we see colours’, explains Micha? Durjasz. – We set the appropriate frequency for a given matter and then we are able to observe the only one that interests us. In our last research, we set the frequency at 6,031 GHz i 6,035 GHz’.

Previously, the method of searching for methanol was different – you scanned the Milky Way ‘centimetre by centimetre’, and if you spotted the detection, then the astronomers stopped their observations in that particular area for a longer time.

– ‘Today, we already recognize star-forming areas, so we can focus on searching for the molecule we are interested in at the right frequency,’ explains Prof. Bartkiewicz.

The scientists from Toru? had spent many months observing these areas, looking for even the smallest methanol masers. Then, an idea came from Prof. Marian Szymczak.

Similar analyses of the sky have been carried out all over the world – there are several teams that have been dealing with this, for example in Southern Africa, Great Britain and Australia. It should be noted that the centre in Toru? earned a great deal of merit in this area – it was at the NCU Institute of Astronomy in Piwnice that many sources have been detected in the northern sky which had not previously been discovered. Recently, however, no one has undertaken such a comprehensive and detailed review of all available sources.

– ‘We used our 32-metre radio telescope rt4 to collect data. A new receiver was used to pick up waves of this frequency. It is worth noting that it was built in Piwnice, in the former Department of Radio Astronomy, where our engineers built it. Special merit should be attributed to Eugeniusz Pazderski, who designed it,’ says Dr Pawe? Wolak: – Receivers on our radio telescopes partly resemble those used in home radios, the main difference is that we don’t cool these home appliances to very low temperatures – even to -265°C. Such a procedure definitely improves their efficiency.’

Astronomers began by compiling a list of all available sources in the northern sky. Then, those that could be observed through the radio telescope in Piwnice were selected out of the database of about a thousand areas. In total, 445 objects were studied in detail.

– ‘It was a really hard, systematic, often repetitive work, taking a lot of time and requiring patience,’ says mgr Durjasz. – ‘Not only was it time that was needed, but also the right conditions.’

Months of observations of 445 areas of star formation have been successful – astronomers have discovered that 37 of them show emissions, which means they have found the OH molecule there.

‘It turned out that seven sources are completely new – nobody had seen and registered them before.’ – says Prof. Bartkiewicz. – ‘Overall, our detection success was 6.9%. It might seem very little, for some such an effect could be discouraging. Our work with the radio telescope can be compared to listening to a mosquito buzzing during a loud concert.’

Further exploration of young massive stars, especially the newly discovered ones, awaits the Toru? astronomers. They also plan to create precise maps of the areas where the stars are formed. The planned activities, and the data already collected, will be important for a better understanding of the physical conditions of these objects and will provide a lot of information about their magnetic fields.

– ‘In some time, massive stars will become supernovae, black holes, the nuclei of the next generation of stars, or massive elements which give life as we know it. And we still do not know how such a star is born, we do not know its origins. Of course, there are a lot of theories, but it is difficult to examine them, which is why we use all the tools available to us, and so far, radio telescopes have proved their worth,’ explains Dr Wolak.