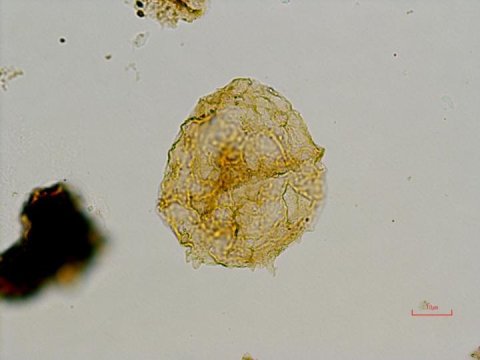 Dinosaur-age fossilised remains of tiny organisms normally found in the sea have been discovered in inland, arid Australia — suggesting the area was, for a short time at least, inundated by sea water 40 million years before Australia’s large inland sea existed.

The fossils are the egg-like cysts of microorganisms known as dinoflagellates, best known for producing red tides or algal blooms that can turn the sea water blood red. The cysts rest on the sea floor before hatching new dinoflagellates.

Researchers at the University of Adelaide, in collaboration with geological consultancy MGPalaeo, discovered these microfossils in Jurassic rocks of south-western Queensland, near the town of Roma.

Described in the journal Palynology, the fossils have been dated to the late Jurassic period, 148 million years ago. This is a time when Australia was joined to Antarctica, and where dinosaurs roamed across ancient rivers, floodplains and swamps.

“We have plenty of evidence from the 110 million-year-old vast inland Eromanga Sea, which covered a large swathe of central, eastern Australia during the Cretaceous period (following on from the Jurassic),” says Dr Carmine Wainman, Postdoctoral Fellow in the University of Adelaide’s Australian School of Petroleum.

“We’ve seen the opalised fossils sold in Adelaide’s Rundle Mall, and the spectacular ancient marine reptiles on display in the South Australian Museum — all from the later Cretaceous period.

“However, this new microfossil evidence from the same region suggests there was a short-lived precursor to this sea 40 million years earlier.”

Dr Wainman believes these microfossils must have been brought inland by an incursion of sea water and then evolved quickly to adapt to the freshwater or brackish conditions as the sea waters slowly receded.

“There is no other feasible explanation for how they managed to reach the interior of the Australian continent when the ancient coastline was thousands of kilometres away,” Dr Wainman says.

“It was probably a result of rising sea levels during a time of greenhouse conditions before the establishment of the Eromanga Sea. With further investigations, we may find more of these microorganisms or even fossilised marine reptiles that uncover untold secrets about how this part of the world looked in the Jurassic.”