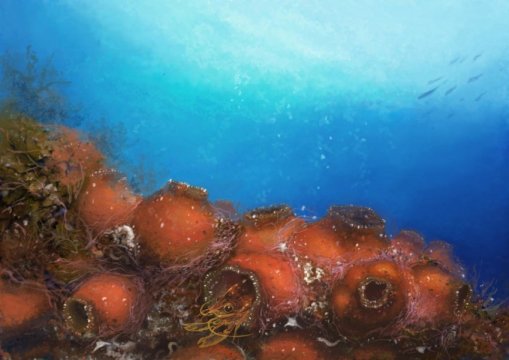 Inspired by the extremely hairy feet of one of the species, the authors decided that they should honour Middle Earth’s greatest halfling, Bilbo Baggins.

Aptly named Odontonia bagginsi, the new shrimp joins the lines of other species named after Tolkien’s characters such as the cave-dwelling harvestman Iandumoema smeagol, the golden lizard Liolaemus smaug and the two subterranean spiders Ochyrocera laracna and Ochyrocera ungoliant.

The newly described shrimps were collected during the Ternate expedition to the Indonesian islands of Tidore and Ternate, organised by Naturalis Biodiversity Center and the Indonesian Institute of Sciences (LIPI) in 2009.

Typically for the Odontonia species, the new shrimps do not reach sizes above a centimetre in length, and were found inside tunicates. It is believed that these symbiotic crustaceans are fully adapted to live inside the cavities of their hosts, which explains their small-sized and smooth bodies.

Unlike most Odontonia species, which live inside solitary tunicates, the new species Odontonia plurellicola was the first one to be associated with a colonial tunicate. These tunicates have even smaller internal cavities, which explains the tiny size of the new species.

To determine the placement of the new species in the tree of life, the scientists compared the shrimps’ anatomical features, including the legs, mouthparts and carapace. As a result, they were assigned to Odontonia. Further, the available genetic information and Scanning Electron Microscope (SEM) images of the unusual feet of the newly discovered shrimp provided a new updated identification key for all members of the species group.

“Being able to describe, draw and even name two new species in my bachelor years was a huge honour. Hopefully, we can show the world that there are many new species just waiting to be discovered, if you simply look close enough!” says Werner de Gier, who is currently writing his graduate thesis at Naturalis Biodiversity Center and working together with Dr. Charles Fransen on crustaceans.