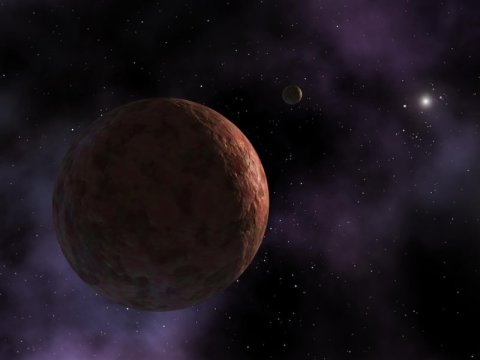 Bumper car-like interactions at the edges of our solar system — and not a mysterious ninth planet — may explain the dynamics of strange bodies called “detached objects,” according to a new study.

CU Boulder Assistant Professor Ann-Marie Madigan and a team of researchers have offered up a new theory for the existence of planetary oddities like Sedna. This minor planet orbits Earth’s sun at a distance of 8 billion miles but appears separated from the rest of the solar system.

One theory for its unusual dynamics is that an as-of-yet-unseen ninth planet beyond Neptune may have disturbed the orbits of Sedna and other detached objects. But Madigan and her colleagues calculated that the orbits of Sedna and its ilk may result from these bodies jostling against each other and space debris in the outer solar system.

“There are so many of these bodies out there. What does their collective gravity do?” said Madigan of the Department of Astrophysical and Planetary Sciences (APS) and JILA. “We can solve a lot of these problems by just taking into account that question.”

The researchers will present their findings on June 4 at a press briefing at the 232nd meeting of the American Astronomical Society, which runs from June 3-7 in Denver.

Detached objects like Sedna get their name because they complete humongous, circular orbits that bring them nowhere close to big planets like Jupiter or Neptune. How they got to the outer solar system on their own is an ongoing mystery.

Using computer simulations, Madigan’s team came up with one possible answer. Jacob Fleisig, an undergraduate studying astrophysics at CU Boulder, calculated that these icy objects orbit the sun like the hands of a clock. The orbits of smaller objects, such as asteroids, however, move faster than the larger ones, such as Sedna.

“You see a pileup of the orbits of smaller objects to one side of the sun,” said Fleisig, who is the lead author of the new research. “These orbits crash into the bigger body, and what happens is those interactions will change its orbit from an oval shape to a more circular shape.”

In other words, Sedna’s orbit goes from normal to detached entirely because of those small-scale interactions. The team’s observations also fall in line with research from 2012, which observed that the bigger a detached object gets, the farther away its orbit becomes from the sun. Alexander Zderic, a graduate student in APS at CU Boulder, also co-authored the new research.

The findings may also provide clues around another phenomenon: the extinction of the dinosaurs. As space debris interacts in the outer solar system, the orbits of these objects tighten and widen in a repeating cycle. This cycle could wind up shooting comets toward the inner solar system — including in the direction of Earth — on a predictable timescale.

“While we’re not able to say that this pattern killed the dinosaurs,” Fleisig said, “it’s tantalizing.”