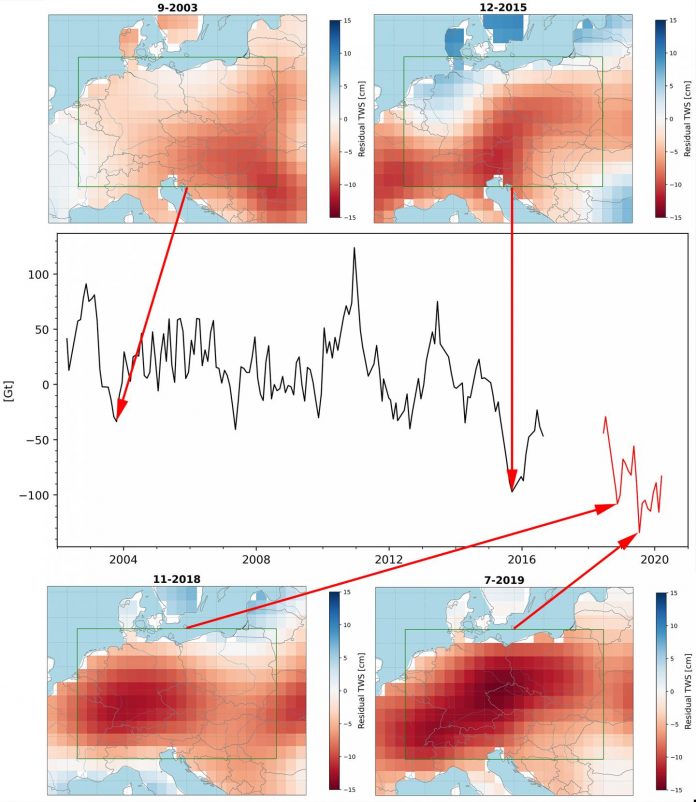 The GRACE-FO (Gravity Recovery and Climate Experiment-Follow-On) satellites launched in May 2018 are able to quantify the water mass deficit in Central Europe. Relative to long-term climate development, the water mass deficits during the two consecutive summer droughts of 2018 and 2019 amounted to 112 Gt in 2018 and even 145 Gt in 2019, according to a research team from the German Research Centre for Geosciences GFZ and the University of Potsdam led by Eva Börgens. The deficits in 2018 and 2019 are thus 73 percent and 94 percent of the average fluctuation in seasonal water storage. In other words, compared with the average value, it would take about twice the increase in water over the winter to compensate for this deficit. The changes are so serious that a recovery within one year is not to be expected. The water shortage in the years 2018 and 2019 is thus the largest in the entire GRACE and GRACE-FO measurement campaign of almost 20 years. The results were published in the journal Geophysical Research Letters.

The GRACE-FO pair of satellites records the movement of water on Earth based on variations of the Earth’s gravitational field triggered by this movement. These variations can be determined from high-precision distance measurements using microwave signals emitted by the two satellites flying behind each other. GRACE-FO is the successor project of GRACE. The two GRACE satellites had completed their mission in 2017 after 15 years of operation.

On the whole, the data show no offset between the two missions, which confirms the successful continuation of GRACE by GRACE-FO and thus the reliability of the observation of extreme events in Central Europe. According to the researchers, this allows a joint evaluation of the four Central European droughts in the years 2003, 2015, 2018 and 2019: Compared to 2003 and 2015, 2018 and 2019 were significantly drier. In 2019 the water shortage was so severe that a recovery of water supplies within one year is not expected, especially since the winter of 2019/2020 brought only a very slight recovery.

In order to be able to draw a comparison between GRACE and GRACE-FO drought observations and other parts of the water balance, such as soil moisture or surface water, the data were converted into drought indices. In contrast to other data sources, the data of GRACE-FO and GRACE allow to cover the entire water balance in lakes, rivers, soils and groundwater. Measurements on surface waters such as Lake Constance, on the other hand, can be strongly influenced by local or regional factors.

“The study shows how important the long time series of observations from the GRACE and GRACE-FO missions are for classifying current climatic events,” says study leader Eva Börgens. “Whether the drought years 2015, 2018 and 2019 are the first signs of longer-term change in Central Europe or merely statistical outliers will only be known in the future. However, initial data from 2020 suggest that the drought will continue.”

Temporal evolution of water mass anomaly over central Europe observed with the GRACE and GRACE Follow-On mission. The time series displays the water mass anomaly over Central Europe (green box) in gigatons. The changing spatial patterns are given in corresponding water heights. (Source: Eva Börgens, GFZ; Based on GRACE/GRACE-FO GFZ RL06 as available from gravis.gfz-potsdam.de)
https://media.gfz-potsdam.de/gfz/wv/pm/20/11310_Timeseries-europe-water_E-Boergens-GFZ.mp4

The four Central European droughts of the years 2003, 2015, 2018, and 2019: Shown are the water mass anomalies, i.e. the long term mean annual signal has been removed. The time series plot in the middle displays the total water mass anomaly over Central Europe in gigatons, whereas the four maps show the spatial distribution of the anomalie (in equivalent water height) in the driest month of each drought year. (Image: Eva Börgens, GFZ; Based on GRACE/GRACE-FO GFZ RL06 as available from gravis.gfz-potsdam.de)
https://media.gfz-potsdam.de/gfz/wv/pm/20/11309_Drought_E-Boergens-GFZ.png

Illustration of the two satellites of the GRACE-FO mission in front of the earth’s gravity field (Rendering Filmhaus Berlin / GFZ).
https://media.gfz-potsdam.de/gfz/wv/Transfer/GRACE-FO/10805_GRACE-FO-Geoid_GFZ.jpg