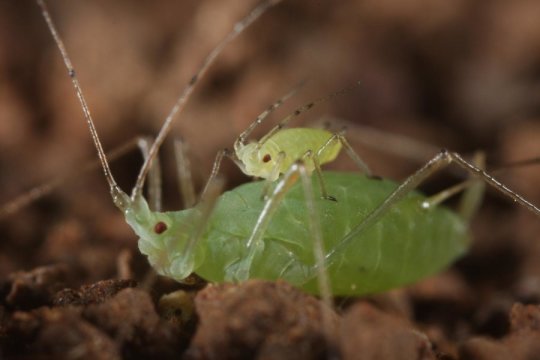 Young aphids may ride on the backs of adult aphids to get back to the safety of a host plant quicker, according to an article published in Frontiers in Zoology.

Researchers at the University of Haifa, Israel, observed large groups of aphids dropping to the ground from the plants they were attached to as a defence against animals grazing on the plants. Following the escape, the authors noticed young aphids mounting the backs of adult aphids and “catching a ride,” which allowed them to reach the safety of a new plant faster.

Dr Moshe Gish, corresponding author of the study, said: “Since the ground is a hostile environment for an aphid, the faster it returns to a host plant, the higher the aphid’s chances of survival. Young aphids have difficulty travelling over cracks, stones and twigs, so riding on a back of a fast-walking adult can shorten the time a young aphid needs to spend off the plant. Since young aphids cannot survive very long on the ground, this behavior may improve their chances of survival.

“It is quite uncommon for a colony of non-social, mixed-age animals, to suddenly have to escape into a totally new and dangerous environment. In this case, it is “every aphid for itself” and interactions between individuals, which are normally rare when the aphids are on the plant, become a means of survival.”

Dr Gish said: “We were surprised to find that the adults do not seem to like young aphids climbing on their back. The fact that the riding behavior exists indicates that there is an overall benefit for the aphid colony; the help it provides for the young aphids outweighs the cost of slowing down the adults.”

Dr Gish added: “The fact that such a behaviour has been selected for suggests that the threat of large plant eaters to plant-dwelling insects may be quite significant. It also adds another degree of sophistication to these tiny pests, which are among modern agriculture’s biggest enemies.”

The researchers reared colonies of pea aphids on fava bean plants in a laboratory. They then simulated a plant-eating mammal by tipping each fava bean plant and gently tapping the base of the stem while breathing on it, causing the aphids to immediately drop to the surface. The authors then observed how young and adult aphids interacted and how long it took them to walk to a new plant. They also explored whether the adult aphids tried to remove the young from their backs, and tested the frequency of riding events performed by direct offspring compared to non-related aphids.

The authors found that the young aphids were no more likely to ride on an adult related to them than an adult they had no relation to. This supports the idea of a lack of parental care or recognition among these aphids.

The authors caution that these behaviors were observed in a laboratory, therefore care should be taken when generalising outside of this setting.