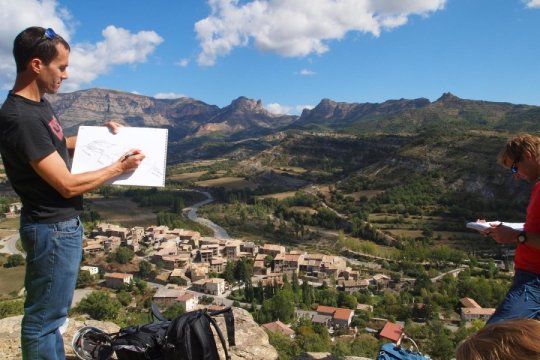 56 million years ago, the Earth experienced an exceptional episode of global warming. In a very short time on a geological scale, within 10 to 20’000 years, the average temperature increased by 5 to 8 degrees, only returning to its original level a few hundred thousand years later. Based on the analysis of sediments from the southern slope of the Pyrenees, researchers from the University of Geneva (UNIGE) measured the impact of this warming on river floods and the surrounding landscapes: the amplitude of floods increased by a factor of eight — and sometimes even by a factor of 14 -, and vegetated landscapes may have been replaced by arid pebbly plains. Their disturbing conclusions, to be discovered in Scientific Reports, show that the consequences of such global warming may have been much greater than predicted by current climate models.

“The method we relied on to analyse this global warming is directly inspired by cell signaling in systems biology, where researchers analyse the response of cells to external stimuli and the ensuing signal transmission,” explains Sébastien Castelltort, professor in the Department of Earth Sciences at the UNIGE Faculty of Sciences, and leader of the study, in collaboration with researchers from the universities of Lausanne, Utrecht, Western Washington and Austin. “We are interested in how a system, in this case the hydrologic cycle through the behavior of rivers, reacts to an external signal, here the global warming.” This project focused on an extreme climatic case that was well known to scientists: a warming of 5 to 8 degrees that occurred 56 million years ago, between the Paleocene and the Eocene epochs, also known by the acronym PETM (Palaeocene-Eocene Thermal Maximum). Named Earth Surface Signaling System (ESSS) this project is supported by the Swiss National Science Foundation (SNSF).

As early as the 1970s, scientists observed a strong anomaly in the ratio between stable carbon isotopes (?13C), due to the relative increase in the proportion of the light isotope (12C) compared to the heavy isotope (13C), reflecting a disruption of the carbon cycle, both in the oceans and on the continents, associated with a global warming and its spectacular consequences. Palm trees thrived at polar latitudes and some marine plankton, such as dinoflagellate Apectodinium, normally restricted to tropical waters, suddenly spread across the globe. Geologists use this type of observation as true “paleothermometres,” which in this case show a rise in surface water temperature that has reached almost 36 degrees in places, a lethal temperature for many organisms. Several phenomena are cited as possible causes for this global warming, from the intense volcanic activity in several areas of the globe at this period, to the destabilization of methane hydrates, these methane “ice cubes” that only remain stable under certain pressure and temperature conditions, and which by degassing would have released their greenhouse gas.

But although the event is known and its causes have been extensively explored, what about the consequences? “The question is important because there is an obvious analogy with the current global warming. There are lessons to be learned from this event, even more so as the rise in temperatures we are currently witnessing seems to be much faster,” Sébastien Castelltort emphasizes.

Pebbles that reveal the history of rivers

The Spanish Pyrenees offer sediments that allow us to observe the ancient river channels and to determine their size. As part of Chen Chen’s thesis project, a doctoral student at the Department of Earth Science at the UNIGE Faculty of Sciences, thousands of ancient river pebbles were measured in the field. Step by step, thanks to the direct relationship between the size of the pebbles and the slope of the rivers, researchers were thus able to calculate their flow velocity and discharge. They have therefore unveiled the whole history of these rivers, and that of the spectacular changes that have affected them.

56 million years ago, the Pyrenees were being formed and their foothills were traversed by small isolated channels in a flood plain where they deposited very fertile alluvium, promoting the development of vegetation whose roots would anchor the soil. Leaving the Pyrenean piedmont, these small rivers then headed west into the Atlantic which was then only about thirty kilometres away.

“With global warming, the landscape changed completely. The channel-forming floods, which occur on average every 2 to 3 years and whose flow we have been able to measure, went up to 14 times greater than before when climate was cooler,” explains Sébastien Castelltort. During the PETM, rivers constantly changed course, they no longer adapted to increased discharge by incising their bed but instead they widened sometimes dramatically, from 15 to 160 meters wide in the most extreme case. Instead of being trapped in the floodplains, the alluvium was transferred directly towards the ocean, and the vegetation seemed to disappear. The landscape turned into arid extensive gravel plains, crossed by ephemeral and torrential rivers.

Scientists still do not know how precipitation patterns have changed, but they know that this warming has led to more intense floods and higher seasonality, with significantly warmer summers. Higher evaporation resulted in an unexpected increase in flood magnitude. One degree of temperature rise implies a 7% increase in the atmosphere capacity to retain moisture, and this ratio is generally used to assess the increase in precipitation. “But our study shows that there are thresholds, non-linear evolutions that go beyond this ratio. With a ratio of 14 for flood magnitude, we face effects that we do not understand, which can perhaps be explained by local factors, but also by global factors that are not yet incorporated into current climate models. Our study proves that the risks associated with global warming may be far greater than we generally think,” concludes Sébastien Castelltort.