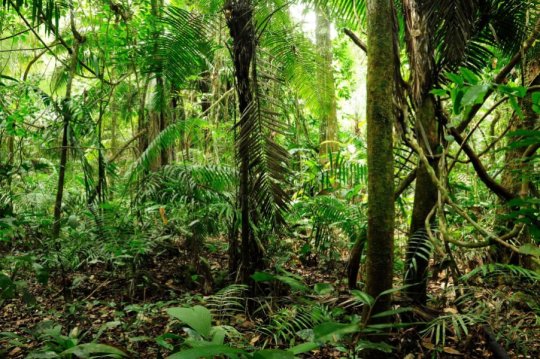 Producing the first comprehensive fine-scale map of the world’s remaining marine and terrestrial wild places, conservation scientists writing in the journal Nature say that just 23 percent of the world’s landmass can now be considered wilderness, with the rest — excluding Antarctica — lost to the direct effects of human activities.

These disturbing findings are particularly troubling as numerous recent studies reveal that Earth’s remaining wilderness areas are increasingly important buffers against the effects of climate change and other human impacts. The authors note two upcoming gatherings of key decision makes will be crucial to stopping current rate of loss.

Said the paper’s lead author James Watson of WCS and the University of Queensland: “These results are nothing short of a horror story for the planet’s last wild places. The loss of wilderness must be treated in the same way we treat extinction. There is no reversing once the first cut enters. The decision is forever.”

The authors describe wilderness areas as those places that do not have industrial level activity within them according to the marine and terrestrial human footprint. Local communities can live within them, hunt and fish, etc.

Various analyses reveal that wilderness areas provide increasingly important refuges for species that are declining in landscapes dominated by people. In the seas, they are the last regions that still contain viable populations of top predators, such as tuna, marlins and sharks.

In addition, wilderness areas are also places where enormous amounts of carbon is stored and sequestered with intact ecosystems being at least twice important than similar degraded habitats when it comes carbon mitigation.

The loss of wilderness is not just a biodiversity conservation and climate issue. Many wildernesses are home to millions of indigenous people who rely on them for maintaining their long bio-cultural connections to land and sea. Their loss is eroding many cultures around the world.

As bleak as these recent finding are, the authors say there is still a chance for Earth’s remaining wilderness can be protected. Incredibly, just 20 nations hold 94 percent of the worlds marine and terrestrial wilderness areas (excluding Antarctica and the High Seas), with five mega wilderness nations (Russia, Canada, Australia, United States and Brazil) containing 70 percent. The authors argue that these nations have an enormous role to play to secure the last of the wild.

Said John Robinson, WCS Executive Vice President for Global Conservation at WCS and a co-author of the paper: “Wilderness will only be secured globally if these nations take a leadership role. Right now, across the board, this type of leadership is missing. Already we have lost so much. We must grasp these opportunities to secure the wilderness before it disappears forever.”

At the 14th meeting of the Conference of the Parties to the Convention on Biological Diversity (CBD), held from November 17-29, signatory governments, intergovernmental organizations such as the International Union for Conservation of Nature (IUCN), international non-governmental organizations, and the scientific community will meet to work towards a strategic plan for the protection of biodiversity after 2020. The authors of the Nature paper and their organizations urge participants at the meeting to include a mandated target for wilderness conservation. In their view, a bold yet achievable target is to define and conserve 100 percent of all remaining intact ecosystems.

The second meeting is the United Nations Framework Convention on Climate Change Katowice Climate Change Conference from December 2-14. There, carbon sequestration and storage capacities of wilderness areas could be formally documented, and the importance of conserving them written into the policy recommendations. Such a move would enable nations to make the protection of wilderness areas an integral part of their strategy for reducing emissions.