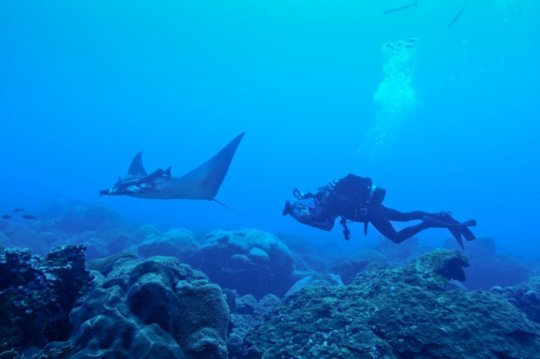 A graduate student at Scripps Institution of Oceanography at the University of California San Diego and colleagues from NOAA’s Office of National Marine Sanctuaries have discovered the world’s first known manta ray nursery.

Located in the Gulf of Mexico off the coast of Texas at NOAA’s Flower Garden Banks National Marine Sanctuary, the juvenile manta ray habitat is the first of its kind to be described in a scientific study.

Joshua Stewart, a marine biology PhD candidate at Scripps and lead author of the study, observed the juvenile mantas while conducting research on manta population structure at Flower Garden Banks, one of 15 federally designated underwater areas protected by the Office of National Marine Sanctuaries.

“The juvenile life stage for oceanic mantas has been a bit of a black box for us, since we’re so rarely able to observe them,” said Stewart, who also serves as executive director of the Manta Trust, a global manta conservation program. “Identifying this area as a nursery highlights its importance for conservation and management, but it also gives us the opportunity to focus on the juveniles and learn about them. This discovery is a major advancement in our understanding of the species and the importance of different habitats throughout their lives.”

Known as the gentle giants of the sea, oceanic manta rays (Mobula birostris) are large, plankton-eating rays that live in the open ocean and can reach sizes of up to 7 meters (23 feet) in wingspan as adults. Oceanic mantas are typically found in subtropical and tropical waters around the world with aggregation sites commonly found far from coastal areas, making their populations hard to access and study. For this reason, major knowledge gaps remain in their basic biology, ecology, and life history. Baby mantas are virtually absent from nearly all manta populations around the world, so even less is known about the juvenile life stage.

Stewart has spent the past seven years studying manta rays and encountered hundreds of adults in the wild, but his sighting of a juvenile at Flower Garden Banks in 2016 was a rare encounter for him. After noticing several other small mantas in the area, he talked with the marine sanctuary staff to see if this was a regular occurrence.

Working with marine sanctuary staff, Stewart and colleagues looked through 25 years of dive log and photo identification data collected by sanctuary research divers. Mantas have unique spot patterns on their underside that can be used to identify individuals, much like a human fingerprint. Using the photo IDs and observational data, Stewart and the marine sanctuary staff determined that about 95% of the mantas that visit Flower Garden Banks are juveniles, measuring an average of 2.25 meters (7.38 feet) in wingspan.

The researchers also compared the habitat use of mantas at the banks to established criteria for defining shark and ray nursery habitats and determined that the sanctuary is the world’s first confirmed manta nursery ground. Recent genetic evidence indicates that oceanic mantas and a proposed third manta species (Mobula cf. birostris) are present at the banks.v

“This is exciting news for the manta rays in the northwestern Gulf of Mexico,” said George P. Schmahl, superintendent of Flower Garden Banks National Marine Sanctuary. “The understanding that the mantas are utilizing the Flower Garden Banks National Marine Sanctuary, and possibly other reefs and banks in the region, as a nursery has increased the value of this habitat for their existence.”

Flower Garden Banks is a pristine sanctuary about 100 miles south of Texas that harbors coral reef ecosystems that have remained far healthier than other reefs in the Caribbean and Gulf of Mexico. These coral communities have grown on top of hard substrate thrust out of the seafloor by the development of salt domes. The researchers suspect that the juvenile mantas are spending time at the relatively shallow banks to recover body temperature after accessing deep, cold waters off the continental slope.

Certain types of zooplankton are most abundant in these deeper habitats and are known to be a favorite prey item for mantas. The northern Gulf of Mexico is home to several species of large sharks, which may make basking at the surface a perilous way to warm up for small, juvenile mantas. Instead, the study’s authors suspect that they retreat to the relative safety of the banks after diving into cold offshore waters. To confirm this, researchers at the sanctuary plan to begin tagging juvenile mantas at the banks to track their movements and diving behavior.

Discovery of the manta ray nursery underscores the importance of marine protected areas for conservation efforts. Manta rays are threatened globally by targeted fisheries and bycatch. Giant manta rays were listed as threatened under the U.S. Endangered Species Act in January of 2018.

Schmahl noted that Flower Garden Banks National Marine Sanctuary is actively pursuing a plan to expand the area protected within the sanctuary by adding additional reefs and banks located in the Northwestern Gulf of Mexico, some of which are also known to provide habitat for the manta rays.

“Nowhere else in the world has a manta ray nursery area been recognized-which heightens the importance of the sanctuary for these pelagic species,” said Schmahl. “The discovery of the sanctuary as a nursery area for the species raises many more questions, some of which we can hopefully start studying with Josh Stewart and other partners.”

Stewart is the recipient of the Dr. Nancy Foster Scholarship, a NOAA program that gives scholars the opportunity to collaborate with sanctuaries on research that is directly relevant to management and conservation. He was originally visiting the Flower Garden Banks to collect tissue samples from mantas to determine if the population found there is genetically related to other populations found in the Gulf of Mexico and Caribbean.

Stewart hopes the discovery of the manta nursery will inform future projects that can dive deeper into understanding and protecting manta rays in the banks and surrounding areas.

“There’s so much we don’t know about mantas and that’s exciting from a science perspective because it means there are so many questions still waiting to be answered,” said Stewart. “From a conservation perspective, it means that a lot of the questions that you get to answer will actually be meaningful and have an impact on management.”