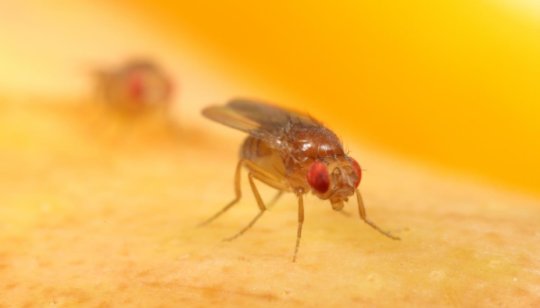 The fruit fly Drosophila melanogaster is quite possibly the most studied organism on the planet. Fruit flies are also quite familiar residents in many of our kitchens, attracted as they are to the fruit bowl. But how do the flies live in the wild? Surprisingly little is known.

Now, researchers reporting in Current Biology on December 6 on their studies of fruit flies living in their ancestral forests of Zimbabwe offer new clues into how the flies live in the wild. The story centers on the African marula fruit, which has a thick rind surrounding sugary pulp, similar to D. melanogaster‘s modern-day favorite of citrus. Their discoveries also help to explain how the fruit flies might first have been domesticated.

“The flies in your kitchen fruit bowl are the direct ancestors of a group of flies that lived on marula in a distant forest,” says Marcus Stensmyr of Lund University in Sweden. “Some 10,000 years ago, these flies moved in with their human neighbors, and their offspring then colonized the world. That’s pretty cool!”

Prior to the new study, D. melanogaster had never been observed from undisturbed wilderness. So, researchers led by Stensmyr and first author Suzan Mansourian set out to find the ancestral African home of this important model organism.

Using traps, they managed to locate wild flies in forests of Southern-Central Africa. Traps places in the vicinity of marula fruit trees quickly filled up with fruit flies. Traps placed in other parts of the forest collected little to no Drosophila. The researchers also showed that the fruit flies preferred marula fruits over citrus, a well-known favorite of theirs in other parts of the world.

When in season, “the flies are solely found with a single host fruit, marula,” Stensmyr says.

In fact, the researchers found that D. melanogaster from other parts of the world still prefer marula over citrus, despite the fact that they’ve surely never seen it before. The flies are attracted to the main chemicals released by marula, which activate odorant receptors known to influence their selection of good spots to lay eggs.

One of the reasons the new discovery is especially intriguing is that marula fruit is not only of importance to flies. The fruit also has long-standing cultural significance to San people, who live in the region.

Archeological excavations of the caves where the San tribe lived during the Late Pleistocene to Early Holocene have uncovered enormous quantities of walnut-sized marula stones, which contain the seeds of the fruit. At least 24 million marula stones have been recovered from a single cave, the researchers note.

“The San evidently spent considerable time collecting and processing marula, which would have been the staple food item during many months of the year,” the researchers write. “Thus, just like D. melanogaster, these San tribes appear to have been seasonal specialists on marula as well.”

They propose that this may explain how fruit flies first came to live among humans, attracted to them by the scent of marula. Once inside the caves, the flies would surely have benefitted from protection from predators and bad weather. Over time, the researchers suggest, the cave flies adapted, becoming more willing to enter dark enclosures and increasingly tolerant of ethanol.

“The fly has always been considered an opportunist and generalist, feeding and breeding in all manners of fruit,” Stensmyr says. “In its native environment, however, the flies show a quite specialized lifestyle, being only found with marula fruit.”

Stensmyr says they’ll now go back to the forests of Africa, to “really figure out what the flies are doing in their native habitat.”

Work in the Stensmyr lab is funded by the Crafoord Foundation, Carl-Tryggers Foundation, and the Swedish Research Council. The Pool lab acknowledges funding from the NIH.