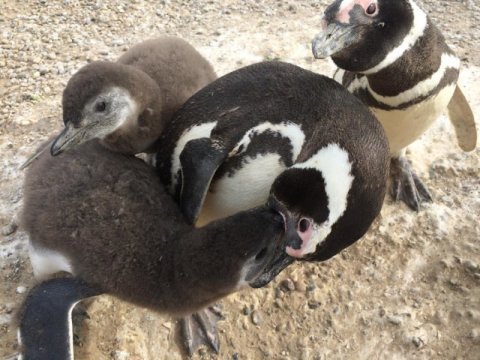 The number of single male Magellanic penguins is rising at this breeding colony. Here’s why.

Like most of their stout-bodied, flippered kin, Magellanic penguins spend much of their lives in the ocean. From late autumn through winter and into spring in the Southern Hemisphere, these South American penguins swim off the coast of southern Brazil, Uruguay and northern Argentina in search of anchovies, sardines and squid.

But as spring turns to summer, they swim thousands of miles south and congregate in big coastal colonies. There, males and females pair off, breed and attempt to rear one or two newly hatched chicks. One of the largest breeding colonies for Magellanic penguins is at Punta Tombo in Argentina, where University of Washington biology professor P. Dee Boersma and her team at the Center for Ecosystem Sentinels have studied the penguins since 1982. They have documented a population decline at Punta Tombo of more than 40 percent since 1987, along with a rising male-to-female ratio, and have spent years trying to pinpoint its cause.

In a paper published Jan. 2 in the journal Ecological Applications, Boersma and UW postdoctoral researcher Natasha Gownaris report that juvenile females are more likely to die at sea, which has caused a skewed sex ratio of nearly three males to every female, as well as population decline. Their study incorporated more than 30 years of population data collected by UW researchers — including banding and studying individual penguins — into models of population dynamics. Boersma and Gownaris’ models show that juveniles have much lower survival rates than adults in all years, a common phenomenon in seabirds. In addition, among both juveniles and adults, females are less likely to survive than males, but this sex bias is much larger among juveniles. Adult females seem to fare worst in years when overall survival is low, suggesting they are more vulnerable than males to disruptions in the food supply during the nonbreeding season.

“From a conservation standpoint, this study shows us how important it is to try to protect the places where these penguins feed throughout the year, both in the breeding season and the nonbreeding season,” said Gownaris. “It all comes down to food for this species.”

This study relied on year-to-year surveys of penguins that had been fitted with stainless-steel bands marked with a unique five-digit number. Between 1983 and 2010, Boersma and her team banded 44,374 chicks at Punta Tombo, tracking generations of Magellanic penguin families. Only 3,296 of these individuals survived and were seen again at the colony. In 57 percent of cases, researchers also noted the sex of the individual — no easy task in a species where males and females look so much alike. Each Southern Hemisphere summer, which corresponds to winter in the Northern Hemisphere, researchers noted which individuals returned to Punta Tombo, and gathered information such as body condition and breeding success.

The 3,296 penguins that returned are a small fraction of the hundreds of thousands who came to Punta Tombo over the three-decade survey period. But information about the banded birds helped Gownaris and Boersma learn about the entire population. Gownaris compared the results from her models of banded birds to annual survey data collected throughout the colony. These comparisons allowed her to see whether trends in the banded birds were also seen in the larger population. One of these trends is an increasingly skewed sex ratio and more single male penguins.

“Two decades ago, there were about 1.5 adult male Magellanic penguins for every adult female at Punta Tombo,” said Gownaris. “Today, it’s approaching three males for every female.”

Both the survey data and population models indicated that adult sex ratios were skewed because fewer females than males returned to the colony each spring for the breeding season. The surveys of banded penguins showed an average return rate for juvenile males of just 17 percent, and 12 percent for juvenile females. Gownaris’ models of the whole population indicated that male juveniles had an average return rate about 33.3 percentage points higher than females. Adult Magellanic penguins had much higher return rates than juveniles, and though females still lagged behind males, the gap was not as large as in juveniles. About 89 percent of adult males returned each year, as did 85 percent of females. Though this may seem like a small difference, the bias in survival accumulates over time. By the time a cohort of penguins reaches age 25, there are about six males for every female.

Other groups have analyzed Magellanic penguin corpses that washed up off the coast of southern Brazil in winter. Their studies also indicate that females are more likely to die of starvation than males — especially juvenile females.

Though male and female Magellanic penguins look similar, males are about 17 percent larger, and have longer and thicker bills. This may give males a significant advantage when foraging for food in the ocean — especially when oceanographic conditions make finding food in the winter more difficult, as the team showed in a paper published in August.

Using population models, Gownaris showed that the higher mortality of females at Punta Tombo contributed to skewed sex ratios and consequent population declines at the site from 1990 to 2010. This contribution was much greater than that of variation in chick survival. The data also suggest that, due to the skewed sex ratio, the population may be declining faster than suggested by the population surveys that are typically used to calculate population trends in the colony.

“It makes sense that the worsening sex ratio is responsible for so much of the population decline at Punta Tombo based on what we know about penguin behavior,” said Gownaris. “Magellanic penguins are serially monogamous — with one male pairing with one female each breeding season — and both parents working together to rear the chicks. So, having fewer females means you have fewer pairings each year overall.”

Gownaris wants to survey other Magellanic penguin breeding colonies along the coast to see if they show similarly skewed sex ratios. She and Boersma hope that this information will help new conservation efforts.

“Over the years, this team has helped preserve the land and waters around breeding colonies like Punta Tombo,” said Gownaris. “But now we’re starting to understand that, to help Magellanic penguins, you have to protect waters where they feed in winter, which are thousands of miles north from Punta Tombo.”