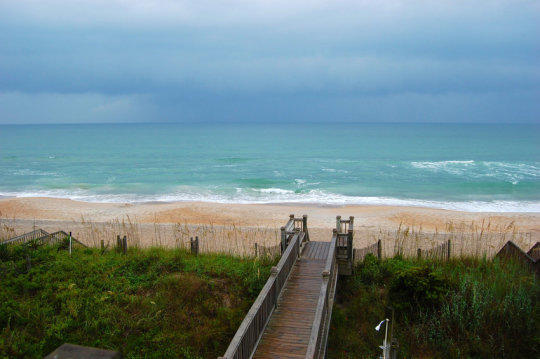 Sea levels are rising globally from ocean warming and melting of land ice, but the seas aren’t rising at the same rate everywhere. Sea levels have risen significantly faster in some U.S. East Coast regions compared to others. A new study led by the Woods Hole Oceanographic Institution (WHOI) reveals why.

Over the 20th century, sea level has risen about a foot and a half in coastal communities near Cape Hatteras in North Carolina and along the Chesapeake Bay in Virginia. In contrast, New York City and Miami have experienced about a 1-foot rise over the same period, while sea levels farther north in Portland, Maine, rose only about half a foot.

The reason is a phenomenon called “post-glacial rebound,” explains Chris Piecuch, lead author of a study published on Dec. 20, 2018, in the journal Nature. Essentially, land areas in the Northern Hemisphere that once were covered by mammoth ice sheets during the last Ice Age — such as Canada and parts of the Northeast U.S. — were weighed down like a trampoline with a boulder on it. At the same time, land around the periphery of the ice sheets — along the U.S. mid-Atlantic coast, for example — rose up. As the ice sheets melted from their peak at the Last Glacial Maximum 26,500 years ago, the weighed-down areas gradually rebounded, while the peripheral lands started sinking, creating sort of a see-saw effect. Even though the ice sheets had disappeared by 7,000 years ago, the see-sawing of post-glacial rebound continues to this day.

To explore why sea levels rose faster during the last century in areas such as Norfolk Naval Station in Virginia and the Outer Banks in North Carolina, Piecuch and colleagues gathered tidal gauge measurements of sea levels, GPS satellite data that show how much the land has moved up and down over time, and fossils in sediment from salt marshes, which record past coastal sea levels. They combined all of this observational data with complex geophysical models — something that has not been done before — to give a more complete view of sea level changes since 1900.

The research team found that post-glacial rebound accounted for most of the variation in sea level rise along the East Coast. But, importantly, when that factor was stripped away, the researchers found that “sea level trends increased steadily from Maine all the way down to Florida,” Piecuch said.

“The cause for that could involve more recent melting of glaciers and ice sheets, groundwater extraction and damming over the last century,” Piecuch says. “Those effects move ice and water mass around at Earth’s surface, and can impact the planet’s crust, gravity field and sea level.”

“Post-glacial rebound is definitely the most important process causing spatial differences in sea level rise on the U.S. East Coast over the last century. And since that process plays out over millennia, we’re confident projecting its influence centuries into the future,” Piecuch explains. “But regarding the mass redistribution piece of the puzzle, we’re less certain how that’s going to evolve into the future, which makes it much more difficult to predict sea level rise and its impact on coastal communities.”

Materials provided by Woods Hole Oceanographic Institution. Note: Content may be edited for style and length.