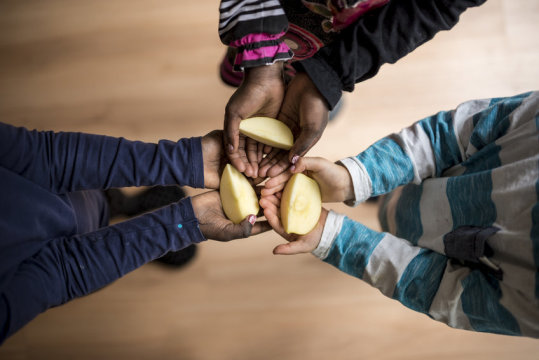 In the modern world, people cooperate with other people including strangers all the time. We give blood, tip providers of various services, and donate to charity despite the fact that there is seemingly nothing in it for us. Now, researchers reporting in Current Biology on September 20 who’ve studied Hadza hunter-gatherer people in Tanzania over a six-year period have new and surprising insight into why people work together.

Their new evidence shows that the Hadza are generally willing to share. But, that doesn’t mean that they always do. In fact, whether a particular individual will share generously depends less on the individual and more on the group they happened to live with at the time.

“We found that year after year, willingness to share with others clustered within residence groups or what we call ‘camps,'” says lead author Coren Apicella of the University of Pennsylvania. “People were living with other people who were similar to them in levels of generosity.”

“We also found individual willingness to share changed from year to year to match their current campmates and found no evidence that people preferred living with more cooperative people,” adds Kristopher Smith, the study’s first author. Importantly, those trends persisted even as the Hadza people changed campmates about every couple of months.

The findings show that it isn’t that people who like to share choose to live with others who also like to share. Rather, people adapt their own sharing tendencies so as to match that of the group they currently live in. In other words, sharing is driven by local group norms and behaviour.

The researchers, including Apicella and Smith along with Tomas Larroucau and Ibrahim Mabulla, were particularly interested in exploring cooperation in the Hadza. That’s because the Hadza still obtain a majority of their calories by hunting and gathering, a subsistence lifestyle that more closely approximates most of human evolution.

“The Hadza are one of the last populations left on the planet who live a similar lifestyle to how our ancestors lived for millions of years,” Mabulla says. “They offer insight into how cooperation evolved.”

“Food is unreliable and people often worry about there being enough food to feed themselves and their families,” Apicella says. “To counteract this, the Hadza share their food with their campmates. High levels of cooperation help to ensure survival in this unpredictable setting.”

To find out what drives the Hadza’s cooperative behavior, the researchers visited 56 camps in Tanzania over six years. During those visits, nearly 400 Hadza adults of all ages were asked to play a public goods game. While the game is typically played by asking people to decide whether to share money with the group or keep it for themselves, the researchers instead asked the Hadza to consider sharing straws of honey, their favorite food.

Each person started with four straws, which they could put toward the whole group or not. The honey straws contributed to the group got tripled.

The data showed that Hadza individuals living in certain camps were consistently more generous than others were. Moreover, individuals behaved differently over time, modifying their behavior to match the norms of the camp they were currently living in.

“You have some camps in which everyone is contributing and some where people are contributing very little,” Smith says. “In a random population, you’d expect all the camps to contribute similar amounts.”

“We were surprised to find that people do not have a stable tendency to cooperate and are instead influenced by those around them,” Apicella says. “Our results show that there is no such thing as good guys and bad guys,” challenging a swath of evolutionary models for explaining cooperation that assume dispositional types: cooperators and defectors.

The findings highlight the flexible nature of human cooperation, the researchers say. More generally, they show that generosity can be contagious.

“If you find yourself surrounded by selfish people, you don’t necessarily have to find a new crowd, but by being generous yourself, you can get others to be generous as well,” Smith says.