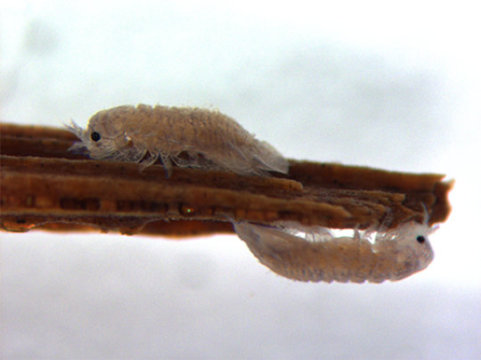 Scientists studying the digestive system of a curious wood-eating crustacean have discovered it may hold the key to sustainably converting wood into biofuel.

Gribble are small marine invertebrates that have evolved to perform an important ecological role eating the abundant supplies of wood washed into the sea from river estuaries.

They can also be something of a marine menace, consuming the wood of boats and piers and causing considerable damage in the process.

Until now, the question of how gribble break through lignin — the highly resistant coating that wraps around the sugar polymers that compose wood — has been a mystery.

The team of scientists, led by the University of York, studied the hind gut of gribble, and discovered that Hemocyanins — the same proteins that make the blood of invertebrates blue — are crucial to their ability to extract sugars from wood.

The discovery brings researchers a step closer to identifying cheaper and more sustainable tools for converting wood into low carbon fuel — a promising alternative to fossil fuels like coal and oil.

Hemocyanins are a group of proteins better known for their role in transporting oxygen in invertebrates in a similar way to haemoglobin in animals. While haemoglobin binds oxygen through its association with iron atoms, giving blood its red colour; hemocyanins do this with copper atoms producing a blue colour.

Oxygen is a highly reactive chemical, and gribble have harnessed the oxidative capabilities of hemocyanins to attack the lignin bonds that hold the wood together.

The research, which involved teams from the Universities of York, Portsmouth, Cambridge and Sao Paulo, has revealed that treating wood with hemocyanins enables more than double the amount of sugar to be released — the same amount that can be released with expensive and energy consuming thermochemical pre-treatments currently used in industry.

Professor Simon McQueen-Mason, from the Department of Biology at the University of York, who led the research team, said: “Gribble are the only animal known to have a sterile digestive system. This makes their method for wood digestion easier to study than that of other wood-consuming creatures such as termites, which rely on thousands of gut microbes to do the digestion for them.”

“We have found that Gribble chew wood into very small pieces before using hemocyanins to disrupt the structure of lignin. GH7 enzymes, the same group of enzymes used by fungi to decompose wood, are then able to break through and release sugars.”

With pressure mounting for global action to be taken on climate change, many countries are rapidly trying to de-carbonise by switching to renewable energy sources such as biofuels.

Woody plant biomass is the most abundant renewable carbon resource on the planet, and, unlike using food crops to make biofuels, its use doesn’t come into conflict with global food security.

Co-author of the paper, Professor Neil Bruce, from the Department of Biology, said: “In the long term this discovery may be useful in reducing the amount of energy required for pre-treating wood to convert it to biofuel.

“The cellulase-enhancing effect of the haemocyanin was equivalent to that of thermochemical pre-treatments used in industry to allow biomass hydrolysis, suggesting new options for bio-based fuel and chemicals production.”

Lead author of the report, Dr Katrin Besser, added “it is fascinating to see how nature adapts to challenges and this discovery adds to evidence that haemocyanins are incredibly versatile and multi-functional proteins.”