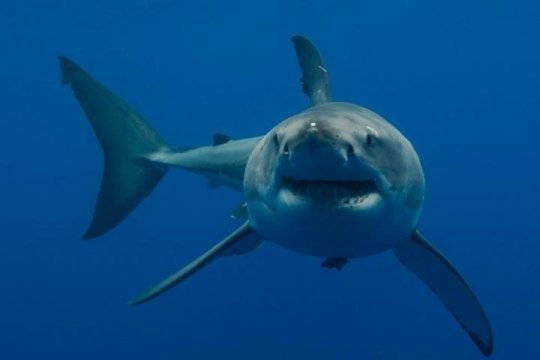 It’s not just their teeth and jaws that people find intriguing. It’s also their funky shapes and unique skeletal makeup that capture attention. Unlike humans and most land animals, sharks have mineralized cartilage skeletons instead of bones. This allows them to move at unbelievable speeds through the water. Since cartilage weighs less than bone and is less dense, sharks can bend, swim, and maneuver in the ocean much differently than their bony fish counterparts.

Because sharks vary in size and shape, there is great diversity in their morphology, physiology and how they swim. For example, the common thresher shark relies on its tail to stun prey when feeding, and the size of its vertebrae and their mechanics may explain why it depends on a strong and long tail that operates like a whip. To move this way requires low stiffness and toughness, or a lower resistance to deformation and ability to absorb energy, respectively.

A shark’s vertebral column is governed by dynamic and complex interactions among tissue composition and morphology, and there are many differences in growth, mineralization and mechanical properties.

Scientists from Florida Atlantic University’s Charles E. Schmidt College of Science and the National Marine Fisheries Service, National Oceanic and Atmospheric Administration (NOAA), predicted that the solid central part of the vertebrae in mature, older sharks would be stiffer and tougher. So they decided to put their theory to a test.

They examined cartilage mechanics from six species of sharks under biologically relevant conditions along the length of their bodies and over a range of ages. They looked at small, infant (young of year) sharks, immature sharks and mature sharks from each of six different species: the dusky shark (Carcharhinus obscurusp); the porbeagle (Lamna nasus); and charismatic sharks like the great white shark (Carcharodon carcharias); the shortfin mako (Isurus oxyrinchus) and the common thresher shark (Alopias vulpinus).

One would assume that since humans and many animals tend to get stiffer and perhaps tougher as they reach adulthood, that the same would be true for sharks. Much to their surprise and contrary to their hypothesis, the researchers discovered the opposite in these swift-swimming marine predators.

Results of the study, published in the Journal of Experimental Biology, show that the youngest sharks were stiffer (able to resist compression) and tougher (able to absorb more energy) than older sharks. The researchers speculate that cartilage from younger sharks has fewer “interruptions” in the mineral matrix within the cartilage. They also discovered that the cartilage was stiffer and tougher in the posteriorly-located vertebrae (toward the back of the body), suggesting that this body region is better equipped to handle the mechanical loading that occurs during swimming.

In addition, although scientists have historically looked at alternating patterns of mineralization on sharks’ vertebrae to determine their age, a key finding from this study reveals that these patterns are not related to time.

“Our results suggest that toughness and stiffness, which are positively correlated, may be operating in concert to support lateral body undulations, which is how a shark moves its body and tail from side-to-side to propel itself forward, while providing efficient energy transmission and return in these swift-swimming apex predators,” said Marianne E. Porter, Ph.D., co-author of the study, an assistant professor in FAU’s Department of Biological Sciences, and director of the Biomechanics Laboratory in the Charles E. Schmidt College of Science.

“These comparative data from our study really highlight the importance of better understanding cartilaginous skeleton mechanics under a wide variety of loading conditions that are representative of the swimming behaviors that we see in the wild,” said Ingle.