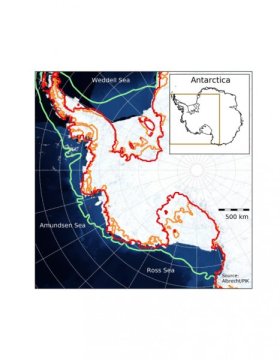 The retreat of the West Antarctic ice masses after the last Ice Age was reversed surprisingly about 10,000 years ago, scientists found. This is in stark contrast to previous assumptions. In fact it was the shrinking itself that stopped the shrinking: relieved from the weight of the ice, the Earth crust lifted and triggered the re-advance of the ice sheet. However, this mechanism is much to slow to prevent dangerous sea-level rise caused by West Antarctica’s ice-loss in the present and near future. Only rapid greenhouse-gas emission reductions can.

“The warming after the last Ice Age made the ice masses of West Antarctica dwindle,” says Torsten Albrecht from the Potsdam Institute for Climate Impact Research, one of the three lead authors of the study now published in the scientific journal Nature. “It retreated inland by more than 1000 kilometers in a period of 1,000 years in large parts of this region — on geological time-scales, this is really high-speed. But now we detected that this process at some point got partially reversed. Instead of potential collapse, the ice sheet grew again by up to 400 kilometers. This is a limited, yet amazing self-induced stabilization. However, it took a whopping 10,000 years, up until now. Given the speed of current climate-change from burning fossil fuels, the mechanism we detected unfortunately does not work fast enough to save today’s ice sheets from melting and causing seas to rise.”

The team was able to find out why the rebound happened in West Antarctica. It is well-known that the Earth crust can get depressed by the weight of kilometer-thick ice on it — when the ice disappears, the ground lifts up. This is called isostatic rebound. However, this depends on the complicated characteristics of the Earth mantle in a given region — scientists for instance talk about viscosity. So far it was not known that the Earth crust in West Antarctica lifted in a way that made the shrinking ice re-advance. Previously, researchers assumed that after the last glacial maximum West Antarctica’s ice retreated continuously. Now it seems they have been generally right about the retreat, but have not fully grasped its dynamics.

“When I observed the re-growth in our numerical computer simulations of Western Antarctica, I first thought this might be a flaw — it looked so different from what you find in the text books,” says Torsten Albrecht. “So I started figuring out the involved interactions between the ice, ocean and Earth and their typical time scales.” In fact, the computer simulations turned out to help making sense out of observational data that other scientists found who had not relation to the work of the Potsdam modeling team — but were equally irritated at first about their respective findings.

During a trip to Antarctica to study ancient ice flows, Jonathan Kingslake and colleagues from Columbia University’s Lamont-Doherty Earth Observatory, based in New York, towed a radar device across the ice. To their surprise, the radar spotted cracks in the ice where there shouldn’t be any. “It was just bizarre,” says Kingslake, who is one of the study’s three lead-authors. “We hadn’t seen these kinds of structure near the base of an ice sheet before.” Further analyses of the signals revealed that the ice on the rocky ground must have been stretching or squishing rapidly, whereas this was so far considered a slow-moving area.

In yet another independent investigation, scientists looked into sediments recovered by drilling through many layers of ice to where it is grounded on rocks. The area was thought to be covered by grounded ice since the past Ice Age. But the team of Reed Scherer from Northern Illinois University, the third lead-author of the study now published, found organic material beneath the ice — the remains of tiny sea creatures long dead. This indicates that this area was connected to the ocean more recently than anybody thought. This is due to the rapid retreat and slow re-growth of the ice thousands of years ago.

A number of factors influences the ice-sheet behavior under warming. In the studied region sea mountains turned out to be rather important for the ice dynamics. The peaks of these mountains underneath the floating ice shelves reach up from the bottom of the ocean. When the bottom rises they can become ice rises within the ice shelf. Since they’re made of solid rock, they increase the stability of the ice sheet. The scientists call this a buttressing effect. Conditions for ice re-growth might be less favorable in other areas.

Yet it is the time-scale that is key in the end. “What happened roughly 10,000 years ago might not dictate where we’re going in our carbon dioxide-enhanced world, in which the oceans are rapidly warming in the Polar regions,” says Scherer. “If the ice sheet were to dramatically retreat now, triggered by anthropogenic warming, the uplift process won’t help regrow the ice sheet until long after coastal cities have felt the effects of sea level rise.”