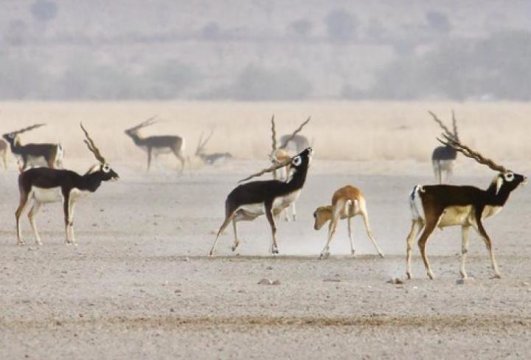 At Tal Chhapar, a wildlife sanctuary in the heart of the Thar desert, a strange drama is staged twice every year. In the blistering heat of summer from March to April and the post-monsoon months of September and October, up to a hundred blackbuck males stake out territories on the flat land to entice females to mate with them in a unique assemblage called a lek.

Female blackbuck who visit the lek generally spend large amounts of time evaluating males before choosing one as a mate. A large part of this evaluation seems to be based on sniffing — even when being courted, females are so intent on inspecting odors from the dung piles, that they are often oblivious to the males’ antics.

What are these females nosing around for?

To answer this question, Jyothi Nair, a student from Uma Ramakrishnan’s group at the National Centre for Biological Sciences (NCBS), Bangalore, collaborated with Shannon Olsson’s team, also from NCBS, to develop a pipeline for investigating odors in a quick, efficient way. In a publication in the journal, Ecology and Evolution, the researchers document their evaluation of different odor collection, identification, and analysis techniques, and describe a protocol optimized for large-scale sampling of odors. Using this protocol, the team have also found that dung piles of males with high mating success seem to be much richer in the chemical meta-cresol than those of less successful males.

“Collecting odor samples from a remote area like Tal Chhapar is an extremely difficult task,” says Nair. This is because most collection methods require many hours to obtain enough amounts of odors for successful analysis. Furthermore, depending on collection methods, samples are often unstable and decompose very quickly even when stored at low temperatures. This is often impossible in remote field sites where refrigeration facilities are non-existent.

Through trial and error, however, the research team from NCBS found a solution — solid phase extraction. In this technique, odors from fecal samples were absorbed onto tiny tubes made of a silicone polymer called polydimethylsiloxane (PDMS). The odor samples in these PDMS tubes were found to be stable enough that they could then be transported safely without refrigeration to NCBS, Bangalore for chemical analyses.

In the laboratory, standard procedures such as thermal desorption (where the odor-laden PDMS tubes are heated to release trapped volatiles), gas chromatography, and mass spectrometry were used to separate and analyze the compounds making up each odor sample.

“During analysis, we faced a lot of problems in identifying compounds,” says V.S. Pragadeesh, who helped Nair with this work. “Compared to plant volatiles, there are comparatively few studies on mammalian volatiles, so we had very little information to help us recognize chemicals in these odors.”

Routine analysis for such data usually involves manual identification and documentation of the detected compounds to create a chemical profile of each odor sample. Conventionally, the process would have taken more than 8 months for all the data in this study. However, the analysis time was reduced to just two weeks through a collaboration with computational biologist, Snehal Karpe, who helped the team develop a semi-automated process that could quickly and efficiently analyze components of each sample with fairly low error rates.

To make sense of all this information, Nair then used a complex statistical technique called, ‘Random Forests’ to compare the chemical profiles of dung piles from different locations within the lek. What emerged, was a strong spatial pattern — dung piles of males at the centre of the lek, where mating success was highest, had much higher levels of the chemical meta-cresol than those of males towards the periphery.

Meta-cresol is a well-known chemical used for communication in many insects and a few mammals such as elephants and horses. The team is now busy testing different chemicals identified in this study, including meta-cresol, on the behavior of captive blackbuck at Mysore zoo.

“This research has been exciting on so many fronts. There are relatively few population studies on chemical communication, and this is the first field-based chemical ecology study for this amazing Indian mammal,” says Dr. Shannon Olsson, who heads the NICE (Naturalist-Inspired Chemical Ecology) laboratory at NCBS, and has been a close collaborator in this study.

“It’s amazing to think that we can map ‘smells’ on the blackbuck lek! This is the first step to better understand whether smells vary across the lek, and potentially, how successful males smell. All thanks to our collaboration with the NICE lab,” says Dr. Uma Ramakrishnan, who is Nair’s mentor at NCBS.

“We hope that our pipeline will inspire more large-scale studies in chemical ecology that can be used to understand the remarkable biodiversity of this country and the world,” adds Olsson.