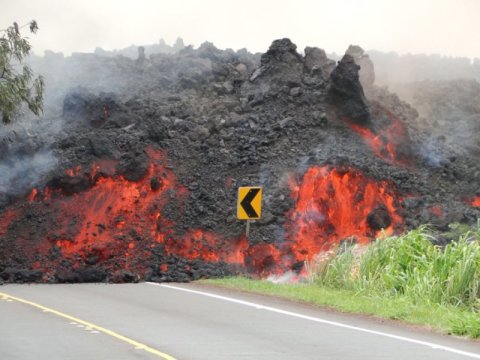 Ever since Hawaii’s Kilauea stopped erupting in August 2018, ceasing activity for the first time in 35 years, scientists have been wondering about the volcano’s future. Its similarities to the Hawaiian seamount Lo`ihi might provide some answers, according to Jacqueline Caplan-Auerbach at Western Washington University.

In her presentation at the 2019 SSA Annual Meeting, Caplan-Auerbach, a volcano seismologist, said Lo`ihi’s 1996 eruption has some remarkable parallels to 2018 activity at Kilauea. Lo`ihi is a submarine volcano located about 22 miles off the southwest coast of the island of Hawaii, with its summit about 3000 feet below sea level.

Caplan-Auerbach has studied Lo`ihi since she was a graduate student in 1996, with more recent work at Kilauea, using data from seismic instruments placed on the submarine flanks of both volcanoes.

After the sudden cessation of activity at Kilauea last summer, “it was very apparent to me that there were some very striking similarities between this eruption and what we saw at Lo`ihi in 1996,” she says.

Like the 2018 Kilauea eruptive sequence, the 1996 Lo`ihi eruption began with a dramatic increase in seismic activity that started in the volcano’s rift zone and transitioned to its summit. Then in both cases, “there was a long sequence of very large earthquakes for a volcano of that size,” says Caplan-Auerbach. Lo`ihi experienced more than 100 magnitude 4 or larger earthquakes, while there were more than 50 magnitude 5 or larger earthquakes at Kilauea.

In both cases, the swarms of earthquakes at the summits of each volcano led to a significant collapse, creating Pele’s Pit on Lo`ihi and enlarging the Halema`uma`u crater at Kilauea.

It’s rare to see the kind of caldera collapse that happened at Kilauea in action, says Caplan-Auerbach, although scientists have watched it occur at Fernandina volcano in the Galápagos Islands and Bárðarbunga volcano in Iceland. “One of the things I would like to know more about is whether this type of activity, this draining of the summit reservoir and this sort of collapse of a pit … indicates a volcano has kind of done its time,” she says.

After its 1996 eruption, Lo`ihi became quiet, with little to no seismicity recorded during two instrument deployments in 1997-1998 and 2010-2011. “It was a level of quiescence that we had never seen there before,” says Caplan-Auerbach. The seamount remained mostly quiet for almost twenty years, gradually increasing seismicity before beginning new earthquake swarms in 2015.

This might indicate that Lo`ihi is replenishing its magma reservoir. If Lo`ihi’s and Kilauea’s similarities are a guide to Kilauea’s future, Kilauea might be quiet for a decade before becoming active again, Caplan-Auerbach suggests.

“I think the good news is that volcanoes tend to talk to us before they do anything truly dramatic,” she says. “so I think we will know when it restores its magma system.”