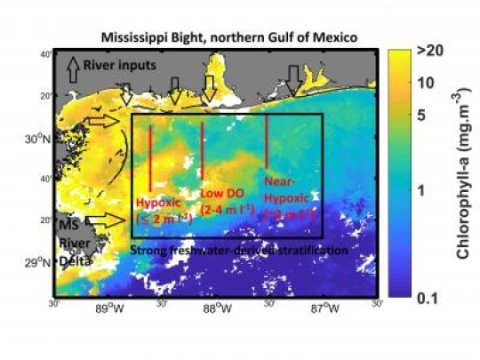 A recent article published in Continental Shelf Research explores aspects of the environmental conditions that can potentially lead to hypoxia in the Mississippi Bight region of the northern Gulf of Mexico. This area extends from Apalachicola in Florida to the Mississippi River Delta.

Dr. Brian Dzwonkowski of the Dauphin Island Sea Lab and University of South Alabama worked with several other research groups to synthesize a range of data sets. The article, “Tracking sea surface salinity and dissolved oxygen on a river-influenced, seasonally stratified shelf, Mississippi Bight, northern Gulf of Mexico” was published in September 2018.

The northern Gulf of Mexico is home to the second largest hypoxic zone in the world, also known as the “Dead Zone,” however, there is no part of the country or the world that is immune. Researchers have directly linked the northern Gulf of Mexico “Dead Zone” to discharge from the Mississippi River. The river water delivers excess nutrients to the region and creates a fresher layer of water at the surface that prevents oxygen from reaching the bottom layer. This leads to a depletion of oxygen over the summer season.

The historic and current focus on “Dead Zone” research and management is centered on the Louisiana and Texas shelf region of the northern Gulf of Mexico, a region to the west of the Mississippi Delta.

Using satellite sea surface salinity data from 2010 to 2016, Dr. Dzwonkowski and his colleagues demonstrated the region to the east of the delta is similarly impacted by river discharge. Accompanying field data from the July of 2016, showed evidence of widespread areas of low bottom dissolved oxygen (and hypoxic conditions in some areas) across the Mississippi Bight region.

As a result, there are potentially large regions of hypoxic and low dissolved oxygen zones that are not included in the yearly estimate of the “Dead Zone.”