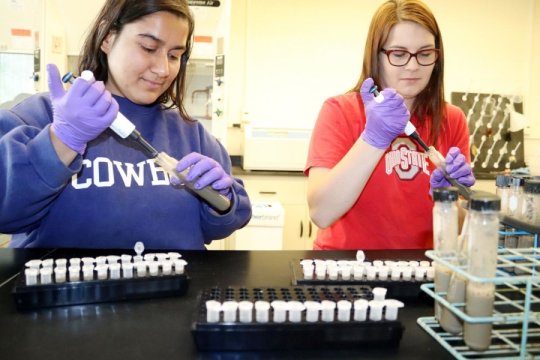 Healthy soil contributes to healthy crops. Farmers know this, so they do what they can to ensure their soil is in good shape. They send samples of their soil for lab testing to find out if it is low in any important nutrients. If it is, they can take steps to improve the health of their soil. These might include adding fertilizers or growing cover crops that feed the soil.

One of the essential nutrients for vigorous crop production is nitrogen. Yet most routine tests done in commercial soil testing labs do not measure available nitrogen in the soil. Tests for nitrogen exist, but for a variety of reasons they cannot be done quickly and cost-effectively. As a result, farmers may be left guessing about the health of their soil. They may apply more or less nitrogen fertilizer than is actually needed.

There are a couple of reasons this is not a good practice. One is the cost. Nitrogen fertilizer is one of the more expensive soil inputs, so farmers may be spending money they do not need to spend. Another reason is the environment. When more nitrogen is added than plants can use, it can run off the land and cause problems for bodies of water downstream.

The lack of a rapid, cost-effective test for soil nitrogen is clearly a problem. Soil scientists at The Ohio State University and Cornell University think they have found a solution. They have shown that a test originally developed for extracting a particular protein in soil is actually a good test for a variety of proteins. Proteins are by far the largest pool of available organic nitrogen in soil. A good, quick test for protein in the soil could also be used as a test for available nitrogen.

The process measures a protein known as glomalin. Glomalin is generally believed to be produced by a common soil microorganism that has a beneficial relationship with plant roots. The tongue-twisting name for this organism is arbuscular mycorrhizal fungi.

An earlier study suggested that the glomalin extraction method might actually extract proteins from other sources. Steve Culman and his research colleagues decided to test that idea. They added a variety of sources of protein to soil samples. They used leaves from corn, bean, and common weeds (plant sources), chicken and beef (animal sources), and white button mushroom and oyster mushroom (fungi).

They applied the so-called glomalin protocol to these soil samples and found that proteins from all of the sources were extracted via this method. The procedure was not, in fact, limited to extracting proteins produced by mycorrhizal fungi.

The researchers, therefore, recommend adoption of new terms such as soil protein, rather than glomalin, to more accurately describe the proteins extracted through this method.

This soil protein extraction procedure is a cost-effective, rapid method that could readily be adopted by commercial soil testing labs. It is possible, however, that some specific protein types may not be recovered by this method. More research on that point would be useful.

“We don’t have many rapid ways to determine how much nitrogen a soil can provide and store over a growing season,” said Culman. “This test is one way that might help us quickly measure an important pool of soil nitrogen. More work is needed to understand soil protein, but we think it has the potential to be used with other rapid measurements to assess the soil health of a farmer’s field.”