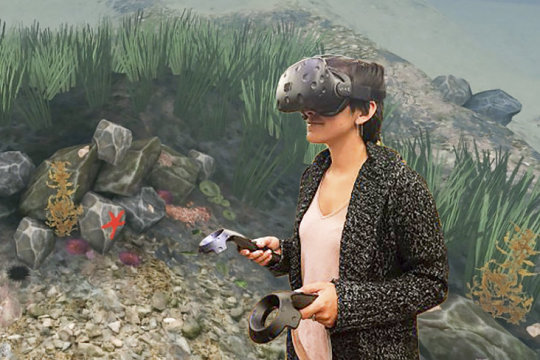 Utter the words “ocean acidification” in mixed company, and you’ll probably get blank stares. Although climate change has grown steadily in the public consciousness, one of its most insidious impacts — a widespread die-off of marine ecosystems driven by carbon dioxide emissions — remains relatively unknown.

Enter virtual reality. In a new study, published Nov. 30 in Frontiers in Psychology, researchers at Stanford and the University of Oregon discovered that VR can be a powerful tool for improving environmental learning gains and attitudes. The researchers found that experiencing a simulation of ocean acidification’s effects spurred meaningful gains in people’s understanding of the issue.

“I believe virtual reality is a powerful tool that can help the environment in so many ways,” said study co-author Jeremy Bailenson, the Thomas More Storke Professor of Communication. “Changing the right minds can have a huge impact.”

With the advent of affordable consumer-grade gear from companies such as Oculus Rift, Samsung and Microsoft, potential audiences for VR are expanding far beyond Stanford’s multimillion-dollar Virtual Human Interaction Lab.

In one such test, high school seniors in a marine biology class at Sacred Heart Preparatory in Atherton, California, took on new virtual identities in the simulation (which is free to download). Each became a pink coral on a rocky underwater reef throbbing with urchins, bream, snails and other creatures.

By the end of the simulation — which fast-forwards to what the reef will look like at the end of this century — those brilliantly varied and colorful species have disappeared. They are replaced by slimy green algae and the silver Salema Porgy — a fish that will likely thrive in more acidic waters. The simulation is based on the work of Fiorenza Micheli, the David and Lucile Packard Professor of Marine Science at Stanford.

Eventually, the viewer’s virtual coral skeleton disintegrates. “If ocean acidification continues, ecosystems like your rocky reef, a world that was once full of biological diversity, will become a world of weeds,” the narration intones.

Connected to the environment

“It was way more realistic than I expected,” said fellow high school senior Alexa Levison. “I’m a visual learner. Seeing ocean acidification happen is different than just hearing about it.”

After the experience, the Sacred Heart students’ scores on questions about ocean acidification causes and mechanisms increased by almost 150 percent and they retained that knowledge when tested several weeks later. In all of the study’s in-school experiments, participants demonstrated increasing knowledge about ocean acidification as their time in the VR learning environment grew longer.

“Across age groups, learning settings and learning content, people understand the processes and effect of ocean acidification after a short immersive VR experience,” said study lead author David Markowitz, a graduate student at the time of the research, now an assistant professor at the University of Oregon.

“We don’t know whether a VR experience results in more learning compared to the same materials presented in other media,” Bailenson said. “What we do know is that it increases motivation — people are thrilled to do it, much more so than opening a textbook — and because of the richness of the data recorded by the VR system, you can tweak the learning materials in real time based on how well someone is learning.”

Bailenson is taking his VR experience beyond the classroom. He has been sending researchers with VR headsets to flea markets and libraries to show the ocean acidification experience. Also, it is part of a permanent virtual reality exhibition at the Tech Museum of Innovation in San Jose, California. He is also collaborating with companies to incorporate environment-themed VR into video games.

Although Bailenson is becoming more confident in the generalizability of the work, he acknowledges the need for replications to test how robust it is and to determine how long the effects endure. Questions remain about the effects of repeated VR exposure and how they persist over time. Research has yet to incorporate a broad demographic sample that spans variables such as age, income and education.

Despite these unknowns, co-author Brian Perone, a graduate student at the time of the research, said he is optimistic about the value of VR in education. “When done right, these experiences can feel real, and can give learners a lasting sense of connectedness,” he said.

Funding for this research was provided by the Gordon and Betty Moore Foundation.